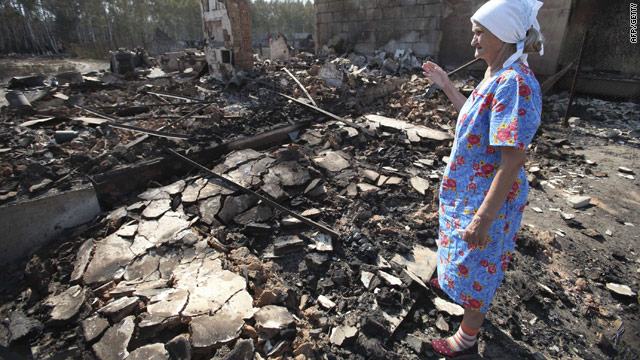 A Russian woman surveys the remains of her burnt out home in Voronezh on August 1, 2010.
STORY HIGHLIGHTS

The fires have destroyed 1,257 homes across 14 regions, the Russian Ministry of Emergency Situations said. It said 2,825 people have been left homeless.

The government has sent 226 aircraft to fight the fires, Sergei Shaposhnikov, the head of the civil defense department at the Emergency Situations Ministry, told Interfax.

Latest figures from the ministry showed some 121,500 hectares (300,105 acres) of forest were burning Saturday. There were also 18 peat bog fires.

More than 3,000 people evacuated from fire-stricken areas are being housed at 12 temporary settlements, Interfax reported.

Shaposhnikov told Interfax the weather forecast made him pessimistic about the possibility the situation might improve in the near future.

"Dry weather will last for at least several more days in both the Central Federal District and the Volga Federal District, with temperature reaching 33 Celsius (91.4 Fahrenheit), and it could reach even 40 Celsius (104 Fahrenheit) in the Nizhny Novgorod region," he said.

The fires are the worst ever to hit the European part of Russia, the region west of the Ural Mountains, the RIA-Novosti news agency said.

President Dmitry Medvedev ordered the Defense Ministry on Friday to use the military to help tackle the fires, the president's spokeswoman, Natalya Timakova, told the Interfax news agency.

Prime Minister Vladimir Putin and Emergency Situations Minister Sergei Shoigu flew Friday to Nizhny Novgorod, where Putin called on local officials to step down because they had been accused of a "chaotic and uncoordinated" response.

Then on Saturday, the head of a local government in a central Russian district where 12 people died in wildfires resigned, according to RIA-Novosti. Alexei Sokolov's resignation has yet to be accepted.

Temperatures across much of western and central Russia have topped 95 Fahrenheit (35 Celsius) during the past five weeks, RIA-Novosti said.