British Ministry of Defence told streamlining on its way 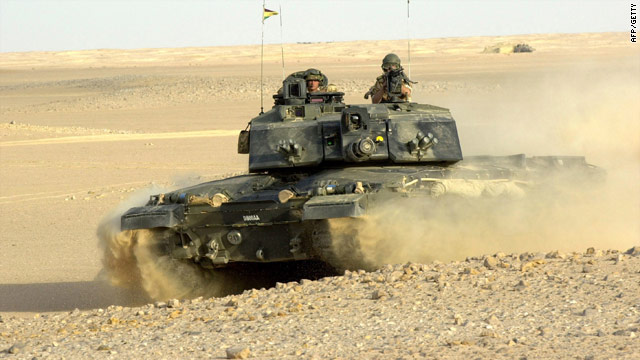 A British Challenger 2 tank takes part in an exercise in Oman: The British Ministry of Defense has been warned to expect cuts.
STORY HIGHLIGHTS
RELATED TOPICS

London, England (CNN) -- Britain's military chiefs have been told to prepare for a "leaner and less centralized" Ministry of Defence.

The warning Friday from Secretary of State for Defence Liam Fox marks the latest stage in attempts by the new British government to shake up the country's armed forces and defense spending.

In a speech in London, Fox -- just returned from a trip to Afghanistan where Britain has almost 10,000 troops deployed -- said the previous Labour administration had left a "dangerous deficit" in the public finances, including an unfunded liability in the ministry's balance sheet of around £37 billion ($57.7 billion) over the next 10 years.

Fox steered clear of any announcements on numbers of possible job losses but said he remains committed to a pledge made in opposition to cut Ministry of Defence running costs by 25 percent.

"I don't pretend it is going to be painless," he said.

But he made it clear that any cuts would be more likely to hit those at the top than those at the bottom. A review of the senior rank structure will be carried out, he said, hinting at probable reductions in the number of senior military positions.

"We cannot demand efficiency from the lower ranks while exempting those at the top," he said.

Friday's speech came against the backdrop of the ongoing Strategic Defence and Security Review, Britain's first such review in 12 years.

The report, scheduled for release at the end of October, will set out what the panel believes should be the shape of the United Kingdom's armed forces in 10 years.

Three factors would determine that shape, Fox said: foreign policy goals; an assessment of the character of future conflicts; and anticipated changes in technology.

Fox said Britain's future strategic posture should be a "flexible and adaptable" one.

According to Professor Malcolm Chalmers of the Royal United Services Institute, a think-tank, that reflects the generally held view among Britain's defense establishment that the current strategic environment is one characterized by "uncertainty and complexity, not by a single existential threat."

The challenge, according to Chalmers, will be to translate that consensus into agreement on where the ax needs to fall.

"Some of the hardest decisions in the review will be those that involve curtailing legacy capabilities with powerful institutional backing in order to create space for new technologies and new tasks that lack such sponsors," he said.

Among those legacy items are fighter jet programs and the procurement of two aircraft carriers, both projects reportedly threatened with big cuts.