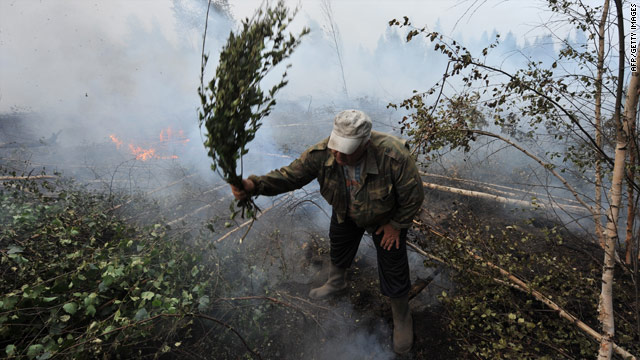 A Russian man attempts to put out a blaze some 155 km south of Moscow in Shatura on August 13, 2010.
STORY HIGHLIGHTS
RELATED TOPICS

Washington (CNN) -- The United States is contributing an estimated $4.5 million worth of firefighting equipment and other supplies to help battle massive wildfires in Russia, according to the Obama administration.

President Barack Obama called Russian President Dmitry Medvedev on Thursday to express his "deepest condolences" for Russian losses in the fires, which have killed hundreds of people this summer, the White House noted.

"The president told President Medvedev that he is monitoring the situation closely, and that the United States is responding to Russia's request for technical assistance in combating the fires," the White House said.

We stand "with the people of Russia as they fight to contain the destructive spread of wildfires," State Department spokesman Philip Crowley said.

"We are taking action to support the heroic efforts of Russian firefighters and emergency responders as they seek to bring these fires under control."

The U.S. Agency for International Development, the U.S. Department of Defense, the U.S. Forest Service, and the state of California are mobilizing firefighting equipment and airlift capacity for Russia, it added.