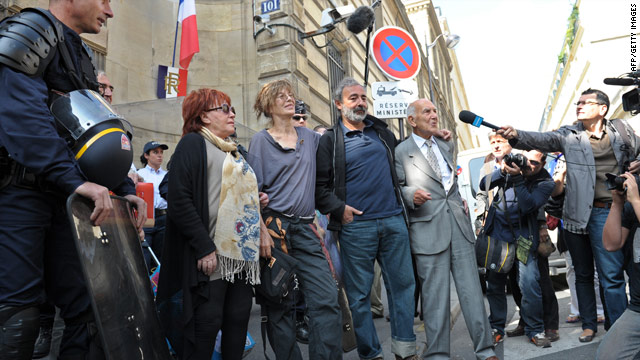 Organized by 50 human rights and activist groups, labor unions and political opponents of Sarkozy the cortege of protesters at one point stretched a mile and a half from the Place de La Republique to the Place de la Bastille, where a stained French flag was hung on a central monument. Organizers said 50,000 filled the streets, though police put the official estimate at 12,000.

Referring to France's contentious role in World War II, protesters held up signs such as "Sarkozy, son of Petain," referring to Marshal Philippe Petain, who led the pro-Nazi Vichy regime.

Organizers said about 130 cities in France are seeing similar protests against Sarkozy's so-called crime-busting proposals which have led to the expulsion of more than 8,000 Roma, commonly known as Gypsies.

Saturday's protests erupted after the recent raids against camps in Lyon and other cities that forced out a total of 8,300 Romanian and Bulgarian nationals of Roma origin. Close to 10,000 were expelled in 2009.

But the Roma are not the sole targets of the recent anti-immigration security measures proposed by the French government, protesters claim.

Video: 'Get tough' approach on immigrants
One must earn French nationality and be worthy of it.
--Nicolas Sarkozy
RELATED TOPICS

Groups representing other causes voiced their concerns at the Paris rally as well, including advocates of illegal immigrants and demonstrators demanding better housing.

After recent anti-police attacks, the country's parliament is considering new laws to take away French citizenship from naturalized immigrants guilty of crimes like attacks on police, polygamy or female circumcision, traditions associated with some immigrant groups.

Some believe Sarkozy's approach of blaming immigrants for security problems flies in the face of France's democratic fundamentals -- liberty, equality and fraternity.

"He is not fighting crime ... He is deliberately putting into question the basic principles of republican equality, and what is already an extremely serious social and economic crisis now threatens the cohesion of all society," organizations supporting the protests said in a statement posted on the Education Without Borders Network's website Saturday.

When he announced the proposals in July, Sarkozy said French citizenship was a privilege.

"One must earn French nationality and be worthy of it," he said. "Anyone who fires on an agent enforcing order no longer deserves to be French."

Immigration policy has long been a top issue for the conservative Sarkozy. As interior minister, he advocated the deportation of foreign nationals caught in violent riots across France in 2005.

But the recent crackdowns have drawn criticism even within Sarkozy's government. Local media reported that Foreign Minister Bernard Kouchner said he was shocked by the president's anti-crime proposals.

Last month's ousting of Roma gypsies without valid identity papers -- drew international criticism with some comparing it to the deportation of Jews during World War II. Something the government said was absurd since those being expelled were being sent back to their homelands with financial compensation of 300 euros ($381) per adult and 100 euros ($127) per

French officials have said the deportations are part of a broader crackdown on illegal immigration.

"We are suffering from the consequences of 50 years of inadequately controlled immigration that led to a failure of integration," he said. "We are so proud of our system of integration, but perhaps we should wake up to see what it has produced. It has worked. It works no longer."