In Dagestan, a bomb wounds a government minister 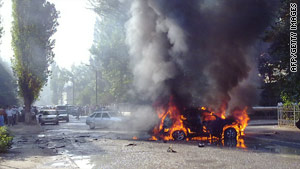 A burning car is seen in Makhachkala, the capital of Dagestan, on September 4, 2010.
STORY HIGHLIGHTS
RELATED TOPICS

Moscow, Russia (CNN) -- A car bomb in the Russian republic of Dagestan killed a driver and injured a government official and his two bodyguards on Saturday, state-run news agencies said.

Investigators said the victims were headed to work in two cars from the minister's apartment in Makhachkala, the region's capital, when a device at the bottom of one of the vehicles exploded seconds later and caused a fire. It wasn't clear which car Bekmurzayev was riding in.

Bekmurzayev was targeted because of his work, Itar-Tass said. Similar attacks in 2003 and 2005 killed his two predecessors, Russia Today said.

Moscow has been targeting terrorism in Dagestan and other regions of the Caucasus, such as Ingushetia and Chechnya.

In recent years, Dagestan has faced ethnic friction, spillover from the discord in neighboring Chechnya and attacks on government officials by Islamists, the International Crisis Group said.