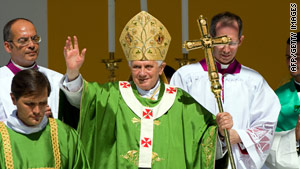 London, England (CNN) -- Pope Benedict XVI is likely to meet victims of child abuse when he visits the United Kingdom next week, the head of the Catholic Church in England and Wales indicated Sunday.

"The pattern of his last five or six visits has been that he has met victims of abuse," Archbishop Vincent Nichols said on the BBC'S "Andrew Marr Show."

"But the rules are very clear," he continued, saying there was no announcement in advance of such meetings, which are private and confidential.

Nichols said he hoped the abuse scandal would not "overshadow" the pope's visit to Scotland and England September 16-19, even as he called abuse a "problem," a "challenge" and a "real tragedy."

"This is an issue we have to take seriously, and we are trying, but it is not the whole story," he said.

The Vatican announced rules in July aimed at stopping the abuse of children by Catholic clergy, following accusations against priests across Europe this year.

The Vatican says only a tiny minority of clergy have molested children.

The regulations announced in July give the pope the authority to defrock a priest or to hand out other punishments without a formal Vatican trial.

This is an issue we have to take seriously, and we are trying, but it is not the whole story.
--Archbishop Vincent Nichols
RELATED TOPICS

They also make it a crime for a priest to download child pornography, and declare the abuse of mentally handicapped people to be as bad as child abuse.

And they double the statute of limitations on church prosecution of suspected molesters from 10 to 20 years.

Barbara Dorris, who campaigns on behalf of abuse victims, said in July that punishing abusive priests would not solve the problem.

"Defrocking a predator, by definition, is too late. Severe harm has already been done. So the focus must be on the front end, not the back end, of the crisis," said Dorris of the Survivors Network of those Abused by Priests.

And a former priest who now helps victims to sue the church said there is nothing new in the regulations.

"There is no change in form from what Pope Pius V said in 1568, [or] Pope Benedict XIV said in 1741," said Patrick Wall, who was trained in church law by the man who is now the Vatican's chief prosecutor of priests accused of abuse.

He said what matters is what the pope does, not what the rules say.

"Authority to act, as it always has, remains with the pope or his delegates," Wall said. "The entire system is dependent on the action of the pope alone ... acting to protect children first and the institution second."

The man who trained Wall in church law is Monsignor Charles Scicluna, who helped write the new rules.

He too said it was the implementation that mattered most.

"A document is always a document. It does not solve all the problems," he said. "It is a very important instrument, but then it is the way you use the instrument that is going to have the real effect on the life of the church."

The new rules come in response to thousands of recent allegations of child abuse by priests in the United States, Europe and Latin America.

They deal only with how the church handles allegations of abuse, said Vatican spokesman, the Rev. Federico Lombardi.

Church law already orders Catholic clergy to comply with the civil law of the country they live in if they suspect child abuse is taking place, he said.

"They take what is already existing practice and make it church law," he said.

CNN's Hada Messia and Pamela Sellers contributed to this report.