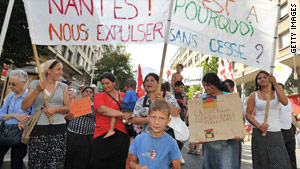 People in Nantes, France, on Saturday protest the treatment of ethnic Roma by the French government.
STORY HIGHLIGHTS

(CNN) -- The European Commission is looking into France's expulsion of more than 8,000 ethnic Roma, commonly referred to as gypsies, the commission's president told CNN Tuesday.

"The European Commission, working with the French authorities, is now making an independent assessment" of the situation, Jose Manuel Barroso said on CNN's "Quest Means Business."

Recent raids against camps in Lyon, France, and other cities forced out a total of 8,300 Romanian and Bulgarian nationals of Roma origin. Close to 10,000 were expelled in 2009.

Barroso said in his first state of the union speech on Tuesday that governments "must respect human rights."

That wasn't specifically aimed at France, he told CNN, though he noted that France is in the middle of a "very politicized debate."

"I do not want to interfere in that debate," he said, but he added that the commission is investigating how France is implementing European law.

"In Europe there is no room for discrimination," Barroso said. "That's why we are going to make these independent assessments with the French authorities and with the other countries, because, in fact, the Roma issue is a general problem.

"We have to be sure that the European directives are properly transposed and implemented in all the European member states," he said.

Immigration policy has long been a top issue for the conservative Sarkozy. As interior minister, he advocated the deportation of foreign nationals caught in violent riots across France in 2005.

But the recent crackdowns have spawned criticism even within Sarkozy's government.

Last month's ousting of Roma gypsies without valid identity papers drew international criticism, with some comparing it to the deportation of Jews during World War II.

The government called the comparison absurd since those being expelled were being sent back to their homelands with financial compensation of 300 euros ($381) per adult and 100 euros ($127) per child, according to France's immigration ministry.

French officials have said the deportations are part of a broader crackdown on illegal immigration.