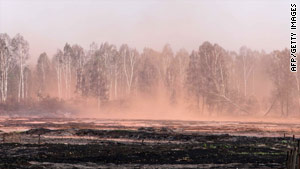 Wildfires have caused havoc across large swathes of Russia during the hottest summer on record.
STORY HIGHLIGHTS
RELATED TOPICS

(CNN) -- An entire village in southern Siberia was burned to ashes by a new wave of wildfires Wednesday, leaving more than a thousand homeless, authorities said.

Nobody was injured and all people were evacuated, the Russian Emergency Situations Ministry told CNN.

Fire destroyed all 433 homes in the village of Nikolayevka, in which 1,166 people lived, the ministry said. The village is in the Russian Altai region, which borders Kazakhstan.

The villagers have been evacuated to social welfare institutions, rest homes and holiday centers, according to the ministry.

The houses in Nikolayevka were almost instantly swept by flames coming from the Kazakh territory, with temperatures as high as 30 degrees Centigrade (86 degrees Fahrenheit) and winds reaching up to 28 meters a second (more than 60 mph), the ministry said.

New fires from Kazakhstan are approaching at least three other villages with a total population of almost 1,500 living in more than 500 houses. Several houses on the outskirts of the village of Bastan have already caught fire and people are being evacuated, the ministry said.

The ministry said it is rapidly reinforcing its fire brigades, rescue teams and equipment to contain the blazes in the Altai region.

Russian President Dmitry Medvedev ordered compensation payments to people who lost their houses. He also instructed the governor of the region to provide a report listing local officials "whose negligence led to such devastating consequences," the Kremlin press service said.