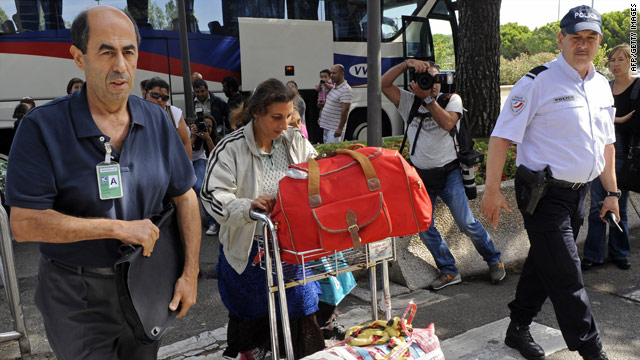 (CNN) -- France's deportation of more than 8,000 ethnic Roma, commonly referred to as gypsies, "is a disgrace" that could trigger legal action, a senior European Commission official said Tuesday.

"Let me be very clear: Discrimination on the basis of ethnic origin or race has no place in Europe," she added.

Authorities in France conducted raids recently at camps in Lyon and other cities that forced out a total of 8,300 Romanian and Bulgarian nationals of Roma origin. Close to 10,000 Roma were expelled in 2009. Officials said the raids were part of a broader crackdown on illegal immigration.

Reding's comments triggered a prompt reaction from Bernard Valero, a spokesman for the French Foreign Ministry.

"We are astonished by Viviane Reding's declaration, which seems excessive and out of context," he said. "This is an extremely serious topic and we must not get wrapped up in a useless polemic."

The expulsion of Roma without identity papers has drawn international criticism, with some comparing it to the deportation of Jews during World War II.

"This is a situation I had thought Europe would not have to witness again after the Second World War," Reding said Tuesday.

The French government called the comparison absurd, since those being expelled were being sent back to their homelands with financial compensation of 300 euros ($381) per adult and 100 euros ($127) per child, according to France's immigration ministry.

Reding said she has "made crystal clear my doubts about the legality of the French measures."

The European Commission found after an initial analysis that France "would be in violation of EU law" if it took steps that targeted a group on the basis of its nationality, race or ethnic origin, she said.

Reding said she is "personally convinced" that the European Commission "will have no choice but to" take legal action against France as a result of the expulsions.