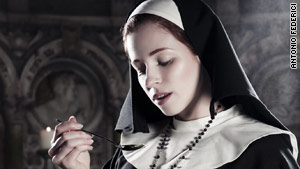 London, England (CNN) -- Britain's advertising watchdog has censured an Italian ice cream manufacturer over an advertisement depicting a heavily pregnant nun that appeared ahead of a papal visit to the UK.

The ad featuring the strapline "immaculately conceived" over an image of the expectant sister spooning from a tub of Antonio Federici ice cream was "likely to cause widespread offense," the Advertising Standards Authority ruled.

The ASA said the publishers of Lady magazine, which carried the ad, had received several complaints from readers.

The watchdog rejected the manufacturer's claims that it was "using gentle humor" to convey the message that "ice cream is our religion."

"We considered the use of a nun pregnant through immaculate conception was likely to be seen as a distortion and mockery of the beliefs of Roman Catholics," the ASA ruling said.

"We concluded that to use such an image in a light hearted way to advertise ice cream was likely to cause serious offence to readers, particularly those who practised the Roman Catholic faith."

The Antonio Federici ad is the company's second invoking religious imagery to fall foul of the ASA. An advertisement featuring a nun and a priest eyeing each other for a kiss was banned in July last year.

The ice cream company said the ASA's ruling amounted to censorship of artistic freedoms ahead of Pope Benedict XVI's visit to Britain this week.

It said it had also been banned from showing another advertisement showing two men dressed as priests apparently on the brink of sharing a kiss. The ASA has not published any ruling on the ad.

A statement from Antonio Federici said the company was seeking to relaliate by securing a series of billboard advertisements along the route the pope's motorcade is expected to take during his visit to London.

"The ASA is unable to distinguish between the 'virgin birth of Jesus Christ,' which formed the basis of their complaint notification, and the 'immaculate conception' which they are now referring to and which we have received no complaints about," the statement said.