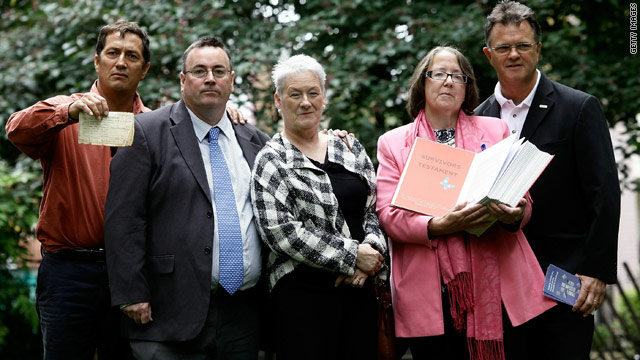 London, England (CNN) -- Sue Cox was 10 years old when she says she was raped by a priest in her family home on the eve of her Confirmation, a sacrament which signifies the cementing of bonds between baptised believers and the Church.

The attack occurred in her bedroom while her family was downstairs. "I was mortified. I started to self-harm. I was ashamed and guilty," she said. Her mother told her: "Perhaps it was one of God's plans."

"It wasn't one of His better ones," Cox said.

Now in her 60s, Cox was one of five abuse survivors who Wednesday urged Pope Benedict XVI to turn over information on abuse claims against the clergy ahead of his arrival in the UK Thursday.

"We want action, we've had the apologies... we need the pope to say, 'I will hand over all information I have on abusing priests wherever they are in the world to the authorities where these people are being protected,'" said Peter Saunders, chief executive of the UK's National Association for People Abused in Childhood (NAPAC).

The Catholic Church is facing allegations of child abuse committed by priests in a number of countries, including the pope's native Germany, as well as Belgium, Ireland, Austria, the Netherlands and the United States.

Video: A close up look at the Popemobile

Last month, Cox wrote a letter to the Archbishop of Westminster Vincent Nichols, the head of the Roman Catholic Church in England and Wales.

It read: "I am so sick and tired of being patronized, anonymized and disregarded by the Church. And the recent obsequious apologies that have come from your offices are doing nothing to help people like me, they are simply making matters worse."

She doesn't want an apology or a meeting with the pope.

"Why the hell would we want to be wheeled out to comply with this campaign? What would abuse victims want to be a part of the PR stunt?" she said Wednesday.

"There are very clear rules that operate. One is that this meeting is never announced beforehand and secondly, that it takes place in private, which is, I think, proper," he said.

"Whether that pattern is continued of meeting with victims of abuse, we have to wait and see. But, it will not be announced beforehand and any such visit will take place in private," Archbishop Nichols said.

None of the people alleging to be victims of priest abuse who spoke Wednesday said they had any plans to meet the pope, nor knew of any victims who had scheduled meetings.

He is replicating the abuse the clergy abuse survivors have experienced; everything behind closed doors, nothing to be spoken of.
--Margaret Kennedy, MACSAC
RELATED TOPICS

She said the strict rules governing private meetings with the pope amounted to a "replication" of abuse, where the power remained in the hands of the church and victims were forced to comply.

"He (the pope) is replicating the abuse the clergy abuse survivors have experienced; everything behind closed doors, nothing to be spoken of," she said.

Kennedy says she was raped by an Anglican priest when she was 12 but she adds: "I do know what it is like to have a man with a collar around his neck invade you."

As a leader of MACSAC she appealed to the Catholic Church to bring those responsible for abuse to account.

Archbishop Nichols said Pope Benedict had issued a number of apologies to abuse victims, and he expected him to do the same again during his visit to Britain.

"He has already on a number of occasions expressed his dismay, his sorrow, he's said to have wept with victims of abuse and I don't think there is any doubt that he understands," Archbishop Nichols said.

He added that the Catholic Church in the UK had been struggling to work through issues arising from the abuse scandal for years but acknowledged there was more work to do.

"I think we know that the work of responding well to victims of abuse, to putting in systems in place in the Church that make sure that it's a safe environment for youngsters and for vulnerable people, that's a long haul," he said, adding, "that's continuing work and I think in this country, we do have experience now that we can share with others," he said.