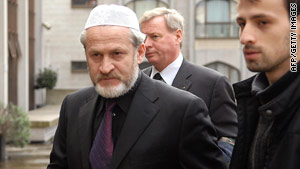 The Polish prosecutor's office warned that Akhmed Zakayev would be arrested on an international warrant if he arrived in Poland to attend the third World Congress of the Chechen People that was being held in the town of Pultusk through Saturday.

Russia previously said it would request Zakayev's extradition if he were apprehended.

"Due to the detention of Akhmed Zakayev in Poland and in accordance with the European convention on extradition, the Russian Prosecutor General's Office is currently preparing material with a Polish translation, which will be sent to the Polish authorities for (Zakayev's) extradition to Russia," the prosecutor's office said Friday.

Zakayev was a brigade general of the Chechen rebel forces during the 1995-1996 war. He later served as culture minister, foreign minister, and deputy prime minister in Chechnya's separatist government in the three years when it enjoyed independence from Russia between 1996 and 1999.

After Russia crushed rebel rule during a second war with Chechnya that started in 1999, Zakayev emigrated to Europe, where has been the head of the Chechen rebel government in exile.

Russia issued an international warrant for Zakayev's arrest in October 2001.

A year later, he was detained in Denmark but the Danish Justice Ministry rejected Russia's demand for Zakayev's extradition.

Then in December 2002 he moved to the United Kingdom, where another Russian extradition request was turned down. Political asylum was granted to Zakayev in November 2003 and he has been living in London ever since.