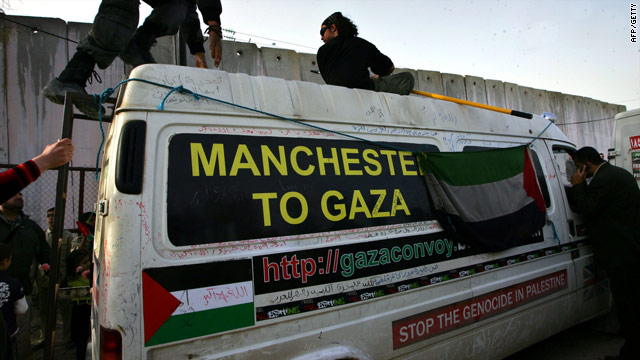 Activists prepare a vehicle on Saturday that will form part of a convoy taking supplies to Gaza.
STORY HIGHLIGHTS
RELATED TOPICS

London, England (CNN) -- A survivor of the fatal Gaza flotilla incident in May headed out Saturday on a new convoy to bring medical supplies to the Palestinian territory.

Kevin Ovenden departed London on Saturday morning with about a dozen vans and more than 30 international volunteers as part of the Viva Palestina Lifeline 5 convoy.

Two other convoys were being organized at the same time from Casablanca, Morocco, and Doha, Qatar, his group said.

The three convoys will aim to meet in Syria before traveling together to Gaza, organizers said.

"Our mission last time was to take aid in and to highlight the siege," Ovenden told CNN. "That's our mission this time."

Nine Turkish activists died May 31 when Israeli troops boarded the Mavi Marmara, a flotilla of activists heading to Gaza. Israel has maintained its troops used force on the activists after they were attacked by those onboard, but passengers on the boat insisted they were fired on without provocation.

"I witnessed the man one meter in front of me being shot in the leg, a man 50 centimeters to the back right of me being shot through the abdomen," Ovenden said of the experience. "Neither of them had anything in their hands. There was no Israeli commandos within the immediate proximity. They were shot from above, so it was simply unfeasible -- in that incident I saw -- for anyone to claim they were in fear of their lives when they rang out those shots."

The incident drew international outrage and badly shook a wide-ranging military and diplomatic alliance between the Jewish state and Turkey, its powerful regional ally.

Israel maintains it must inspect all goods entering Gaza so that weapons do not get into the hands of militants. Gaza is run by Hamas, the Palestinian Islamist movement that has said it is dedicated to the destruction of Israel.

Unlike the flotilla in May, the convoy aims to enter Gaza by land, through the Rafa border crossing with Egypt, Ovenden said. When the three convoys meet in Syria, they plan to be shipped past the point at which the Mavi Marmara was attacked and down to the Egyptian port of Al Arish before going to Rafah, he said.

Organizers said it is the largest convoy set to break the Gaza embargo.