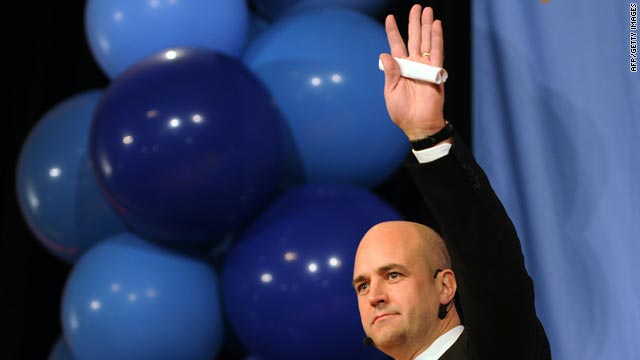 Stockholm, Sweden (CNN) -- Sweden's ruling center-right coalition won re-election Sunday, marking a historic moment as a non-socialist government was elected to a second term for the first time in the country's political history.

The far-right anti-immigration Sweden Democrats party also made a strong showing, winning 5.7 percent of the vote and a place in the national parliament for the first time. With possession of 20 seats, the party could wind up tipping the balance of power between the two major coalitions, although party leaders, including Reinfeldt, have vowed not to cooperate with the Sweden Democrats.

The leader of Sweden's red-green opposition coalition, Mona Sahlin, conceded defeat Sunday night. She told her supporters they were not able to regain the trust of the voters.

Video: Swedes hit polls in historic election
The Swedish people have cast their vote, and they have ruled that we are the ones who should keep governing
--Swedish Prime Minister Fredrik Reinfeldt
RELATED TOPICS

"I am for reductions in tax but not at any cost," she said. "Don't vote away Sweden the welfare state. What we sell and tear down now will never come back."

"I think it is more important than ever that everyone goes to vote today, so that we can stop them," one young woman voter said, referring to the Sweden Democrats. "I think it would be a day of shame for all Swedes if those people would come into parliament."