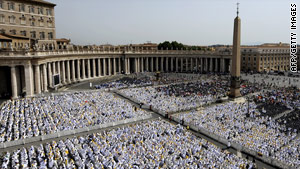 Rome, Italy (CNN) -- An Italian probe into the Vatican Bank marks the first time Italian authorities have ever blocked an account at the bank, prosecutors told CNN Wednesday.

It is not the first time Italian prosecutors have investigated the bank, but probes are extremely rare, he said.

Another Italian bank alerted Bank of Italy investigators to two Vatican Bank transactions that did not appear to comply with anti-money laundering requirements, the Bank of Italy said Tuesday.

Caridi, a top Italian legal scholar who was called to testify by Vatican lawyers, said the bank was an integral part of the Vatican, calling it a "central entity under the oversight of the Holy See."