Serbia 'ready to talk' with Kosovo 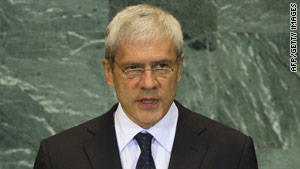 Serbian President Boris Tadic says: "Soon the two parties will be talking to each other."
STORY HIGHLIGHTS
RELATED TOPICS

(CNN) -- Serbia is "ready to talk" with Kosovo and "we will do so in good faith," Serbia's president told the U.N. General Assembly on Saturday.

"Soon the two parties will be talking to each other for the first time in many years," said President Boris Tadic.

"We must be patient and seek out those issues which allow confidence to be built on each side," he added. "There will be many issues to discuss and some of them will be complicated. You all can contribute to an atmosphere that creates trust."

Kosovo had long been a restive province of Serbia with a majority ethnic Albanian population until it declared independence in Feburary 2008.

This followed a civil war that raged in the 1990s between Kosovo Albanian insurgents and Serb security forces and Belgrade-backed Kosovo Serb paramilitaries. After that, the region operated under a U.N. mission and a NATO-led peacekeeping force.

Serbia and many ethnic Serbs staunchly opposed the Kosovo independence move regard Kosovo as Serbian territory and refuse to recognize its sovereignty.

Kosovo is recognized by dozens of countries, including the United States. But Russia backs Serbia in rejecting its independence. Russia, a traditional Serb ally, also opposed NATO intervention in Kosovo in 1999.

The U.N. General Assembly recently adopted a landmark resolution calling for talks between Serbia and Kosovo, and the International Court of Justice recently ruled that Kosovo's declaration of independence "did not violate general international law."

Serbia, which says "statehood has never been attained without the consent of the parent state," says there is not yet a "clear settlement" of the Serbian-Kosovo matter.

He said it is critically important that the U.N. member states that have not recognized Kosovo's independence "to stay on the course of non-recognition" during talks.

"This will be a significant contribution to ensuring that unilateral attempts to impose outcomes to ethnic and territorial disputes are not legitimized," he said.