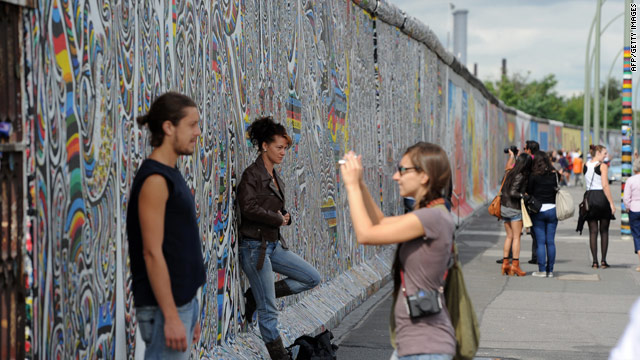 A section of the Berlin Wall has become a tourist attraction at the city's East Side Gallery.
STORY HIGHLIGHTS

(CNN) -- As the 20th anniversary of the reunification between East and West Germany approaches, the country's leader says Germany has become "culturally richer" as a result.

"We're pleased that the Eastern states have become much stronger, that a lot has been put into action and that Germany has become culturally richer," German Chancellor Angela Merkel told CNNI's "Connect the World" on Monday. "I think it's a wonderful story."

The fall of the Berlin Wall in 1989 paved the way for reunification a year later with the collapse of Soviet-backed communist governments across Eastern Europe. Germany will officially mark the reunification milestone on Sunday.

Merkel, the first former East German to lead the reunified country, praised Germany's strides toward accepting multiculturalism, despite tense relations with the Muslim community across Europe.

"We've taken a remarkable step forward here in Germany," she said. "Before we spoke of multiculturalism, of parallel societies or even in my own party there were those who spoke about guest workers who would soon leave Germany. We've all understood now that immigrants are a part of our country. They have to speak our language, they have to receive an education here."

"It's not guaranteed that the growth we're experiencing now will continue over the years, but I think overall we've acted smartly, G20 worked together well and I'm definitely optimistic that we can get through it, if we regulate the markets prudently and when we find the correct exit strategy after this expensive stimulus program," she said.