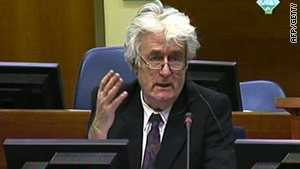 (CNN) -- Former Serbian leader Radovan Karadzic appeared in court Monday to defend himself on charges of war crimes and genocide, resuming a trial which he has fought for years to delay.

He spoke firmly and fluently as he defended himself, occasionally looking irritated or dismissive, but not appearing to obstruct the International Criminal Tribunal for the former Yugoslavia.

The trial was most recently suspended earlier this month to give the defense time to review documents.

Karadzic, who is representing himself, faces 11 counts of genocide, war crimes and crimes against humanity. He has denied the charges.

The last session of the trial took place Sept. 15. At the time, the defense requested time to study a large set of documents that the prosecution had submitted.

The charges against Karadzic stem partly from the killing of more than 7,000 Muslim men and boys in the Bosnian town of Srebrenica in 1995. Karadzic, the Bosnian Serb president at the time, is accused of being responsible for the massacre.

Srebrenica became an emblem for the dissolution of Yugoslavia -- once a multi-ethnic state of Serbs, Croats, Muslims and others -- into six countries during a bloody and brutal conflict in the early 1990s.