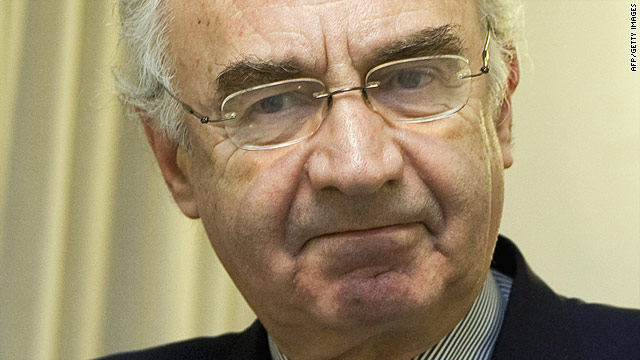 Ettore Tedeschi says the probe is the result of a "misunderstanding."
STORY HIGHLIGHTS
RELATED TOPICS

Rome, Italy (CNN) -- Pope Benedict XVI personally told the director of the Vatican Bank that he trusted him and appreciates the work he is doing, the Vatican said Monday, after Italian authorities launched a money-laundering investigation into the bank.

Ettore Tedeschi, the bank head, was among the faithful meeting Benedict Sunday after the pope's weekly Angelus address.

Tedeschi kissed the pope's hand and gave him a copy of his book "Money and Paradise," and they exchanged a few words, the Vatican said.

Italian prosecutors last week froze Vatican Bank transactions for the first time ever, after the bank failed to provide all the information required by anti-money laundering rules.

Tedeschi told CNN last week he was incredulous and "humiliated" when he learned Italian investigators were looking into money-laundering allegations against the bank.

He said the probe was the result of a "misunderstanding."

"My first reaction was of incredulity and afterwards, that of feeling humiliated in the intense work that, along with (bank) Director-General (Paolo) Cipriani and all of the institute's managers, I've been carrying out," Tedeschi told CNN by e-mail Friday.

"After discussing with Dr. Cipriani the actions that spurred the inquiry, I was relieved, and I've realized that we had to immediately take action in explaining the facts to various levels and places," he said.

The probe began after another Italian bank informed Bank of Italy investigators of two Vatican Bank transactions that did not appear to comply with anti-money laundering requirements, the Bank of Italy said Tuesday.

The Vatican said Tuesday that it was "perplexed and baffled" by the public prosecutor's actions and that the Holy See aims for "complete transparency" in its financial operations.

The Vatican Bank is "the most secret bank in the world," author Jeffrey Robinson said Tuesday, and he said there is no way to find out how much money it controls.