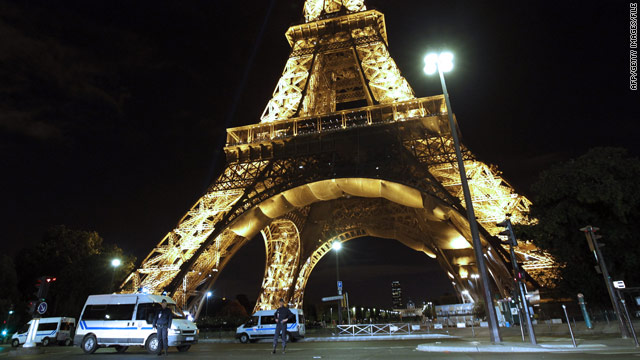 (CNN) -- Visitors returned to the Eiffel Tower on Tuesday night after French police closed the landmark for the second time in less than a month due to a bomb threat, witnesses said.

The threat was called in from a phone booth near the Paris icon, French police told CNN. No further details of the threat were immediately available, but the tower reopened about two-and-a-half hours later, witnesses said.

Niki Cheong, a Malaysian tourist, told CNN he was standing beneath the 1,063-foot (324-meter) tower pondering whether to go up when police began running crime-scene tape around the base of the structure.

"Everybody was told to cross the streets and move about 150 meters (490 feet) away from the tower," he said. The officers said only that an unspecified "problem" caused the evacuation, he said.

The tower remained illuminated, and onlookers applauded when the tower began its routine sparkling at the top of the hour, Cheong said. Tourists were allowed to return shortly before 9 p.m. (3 p.m. ET), he said.

France has been on high alert for possible terrorist attacks and has seen a spate of false alarms in recent days.

The Eiffel Tower was the subject of another bomb threat on September 14, with police announcing that the threat was bogus after an inspection. The threat closed the tower and a nearby metro station and caused the evacuation of about 2,000 people from nearby homes and businesses.