Tens of thousands demonstrate in Europe over spending cuts 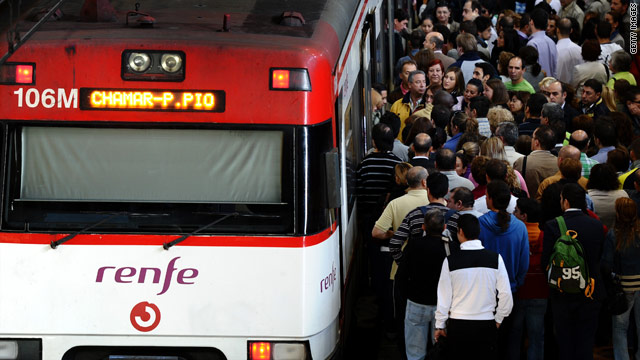 Commuters attempt to board a commuter train operating on a skeleton service in Madrid, Spain, on Wednesday.
STORY HIGHLIGHTS

(CNN) -- European trade unionists descended on Brussels, Belgium, Wednesday in the tens of thousands, determined to both vent their anger at austerity measures and to tell European governments to "put people first."

Belgian police told CNN that around 80,000 people turned out for the demonstration in the capitol, which was organized by the European Trade Union Confederation (ETUC). It represents the interests of trade unions from 36 European countries and claims 60 million members. ETUC's general secretary, John Monks, had said up to 100,000 people were expected.

Even so, the crowd was sufficient to pack streets in central and downtown Brussels. The atmosphere had the vibrant feel of a carnival, with trade unionists in brightly colored T-shirts and huge balloons among the crowd, only the T-shirts and balloons bore slogans advocating the preservation of workers' rights.

Demonstrators wanted to tell European governments and banks to put the needs of people ahead of balanced budgets, according to the ETUC website. Marchers were on the streets to express their concern about both the economic and social situation, and to assert their belief that austerity measures designed to balance budgets will put more people at risk.

The crowd in Brussels marched from the Midi Railway station to Cinquantenaire Arch. Then they packed into Jubilee Park to hear speeches from union representatives. Some of those representatives later met with European Union President Jose Manuel Barroso.

Those demonstrations coincided with a general strike in Spain. Lines were long at train stations and metro services in Madrid. Fewer trains and buses were in service and travel was disrupted both in the capitol and in other big cities across the country.

Spanish unions said the strike was a big success. They said there was 70 percent support among their workers. They also said there was 17 percent less electrical consumption Wednesday than there is on a normal weekday.

Thousands turned out to for marches to support the strike, as well. In Madrid, demonstrators packed streets shoulder-to-shoulder, waving red flags, chanting and blowing whistles.

There were scattered confrontations between police and picketers reported during the day, especially in Barcelona. Some demonstrators were injured and police cars burned there. CNN affiliate CNN+ said a protester was hit by a bus and injured in the city.

But overall, authorities say the day was peaceful

Spanish unions to called the strike because they believe planned government reforms will make it easier for companies to lay off workers, especially higher-paid ones.

The government, however, says the changes will ease Spain's deficit and recession and make for a more competitive economy.

Spain already has 20 percent unemployment -- the highest among countries using the euro currency -- and many see the reforms as inevitable and necessary.