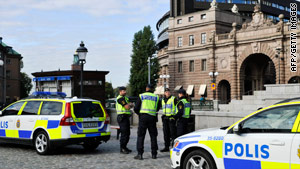 (CNN) -- Sweden has raised its threat level in response to reports that the country could be targeted by terrorists, the Swedish Security Service said Friday.

The threat level has been raised one step, from low to elevated, the Security Service said.

"The assessment is based on intelligence indicating a shift in activities among certain groups in Sweden, judged to be targeted at Sweden," the service said in a statement released Friday.

The assessment was classified and no further details will be provided, the Security Service said.

Sweden's move comes after a report Wednesday that there was a potential terror plot that may involve synchronized attacks in several European countries with at least a dozen people taking part.

The intelligence gathered so far indicated that sites in the United Kingdom, France and Germany as well as Italy and Belgium may have been potential targets in the potential plot, a law enforcement official said Wednesday.

A German counterterrorism source said that a man captured in Afghanistan had tipped off investigators to a potential "Mumbai-style" plot in Europe.