Bosnians vote for presidency and lawmakers 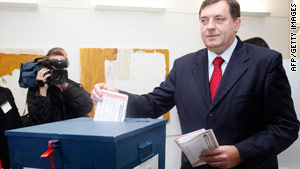 (CNN) -- Bosnians vote Sunday in a key election as the country is at a crossroads between moving closer towards the European Union and NATO in the next four years or sinking deeper into stagnation.

Just over three million citizens are eligible to vote for three members of the presidency, plus lawmakers at three different levels.

Some 50 political parties and coalitions are competing, according to the country's electoral officials.

There are 485 international observers accredited, plus more than 53,000 observers from political parties.

Sunday's elections are the sixth since the end of the war in 1995.