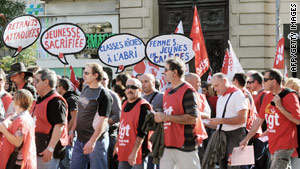 Paris, France (CNN) -- More than a million people went on strike in France Tuesday -- the biggest demonstrations yet in a series of rolling strikes against government plans to raise the retirement age from 60 to 62.

The Ministry of the Interior said as many as 1.2 million people walked out of work, while unions put the figure at 3.5 million.

There were about 250 demonstrations across the country, the government said.

Either way, the numbers are bigger than the last protest in Paris, which police estimated to be 65,000 marchers.

One of the most visible signs of the strike was the presence of students throughout the city in the middle of what should have been their school day. Public school teachers joined the strike and no classes were held Tuesday.

One of the young people smiled and waved as they exited the station in unison.

To a casual observer, the strike did not seem to affect many aspects of Parisian life.

The Metro trains that were not affected ran on time and were not unduly overcrowded. Vehicle traffic inside the city seemed to flow the same as it had the previous day. Businesses that had been open Monday remained so Tuesday.

The strikes are the fourth in the past month in the showdown between workers and the government -- but Tuesday's have no set end date.

Rather than end the strike after 24 hours, as the unions have previously done, this time they promised to vote every day on whether to continue. A prolonged strike could lead to chaos with transportation and the delivery of goods.

Paris transport workers have already voted to strike again Wednesday, which will affect the Paris Metro, buses and RER trains.

Rail workers have also said they will stay off the job Wednesday, and air transport workers are voting Tuesday night on whether to continue industrial action, a transport union spokesman told CNN.

The open-ended strike over pension reforms began days after the Senate began voting on the pension reform bill. The lower house has already passed it.

Workers in French refineries were also joining the labor action, raising the specter of fuel and gas shortages if the strikes continue.

Francois Chereque, head of the trade union French Democratic Confederation of Labour (CFDT), said Tuesday it is the unions' "last chance to make the government back down."

"We understand that a reform is needed, but this one is not fair," he said. "This is going to be a big demonstration and the government is playing with fire. The only way we can make the government back down is by taking a tough line."

Chereque said he wanted the walkouts to last, but he noted many employees don't have the means to pay for repeated strikes.

The strikes were disrupting travel Tuesday, with only about one in five regional trains operating, officials said. Airports were faring only slightly better, with half of the flights from Paris' Orly and a third of the flights from Charles de Gaulle cancelled Tuesday.

About a quarter of education workers were on strike, the Interior Ministry said Tuesday -- very slightly below the percentage who walked off the job September 23. Just over 14 percent of public hospital workers took to the picket lines, slightly higher than last month.

Raising the retirement age is a key part of the government's pension reform plans, currently in the hands of the Senate after passing the National Assembly, the lower house of Parliament. The Senate may vote on the full spate of reforms by the end of the week.

President Nicolas Sarkozy has a majority in both houses of Parliament, meaning the measures are expected to pass.

Nearly 70 percent of the French public back the unions standing up to the reforms, according to polls published in French newspapers Sunday.