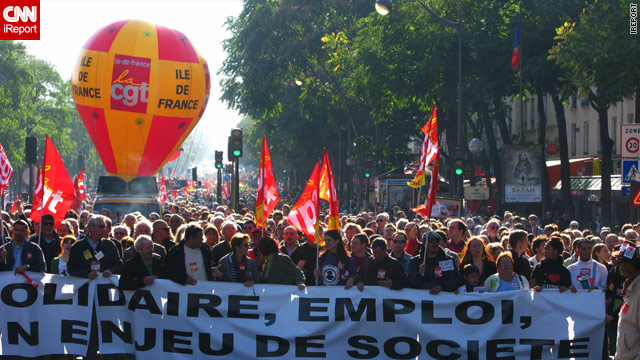 Paris, France (CNN) -- French unions held a second straight day of strikes Wednesday, a day after more than 1 million people walked out to protest government pension reforms -- and at least some of them will stay off the job on Thursday.

French workers are fighting government plans to raise the retirement age from 60 to 62.

Ten out of 12 French oil refineries were hit by the strikes Wednesday, with eight of them fully or partially stopped, according to the French Union of Petroleum Industries.

About half of Paris Metro workers were on strike, and will stay off the job Thursday, a Metro-transport union spokesman said.

About a quarter of French train operator SNCF's staff were on strike Wednesday, down from 40 percent on Tuesday, a company spokesman said.

Tuesday's demonstrations were the biggest yet in a series of rolling strikes against the reforms -- specifically, plans to raise the retirement age from 60 to 62.

The Ministry of the Interior said as many as 1.2 million people walked out of work Tuesday, while unions put the figure at 3.5 million.

There were about 250 demonstrations across the country, the government said.

Either way, the numbers are bigger than the last protest in Paris, which police estimated to be 65,000 marchers.

Vehicle traffic on the streets of Paris seemed to flow as normal and businesses were open, but more disruption loomed.

Unions have said this strike -- the fourth in the past month -- is open-ended, and that workers will vote each day whether to continue the strike the following day. Previous strikes have lasted for a 24-hour period.

The support for the strike from workers in French refineries -- for the first time -- raises the specter of fuel and gas shortages if the strikes continue.

About a quarter of education workers were on strike, the Interior Ministry said Tuesday -- very slightly below the percentage who walked off the job September 23. Just over 14 percent of public hospital workers took to the picket lines, slightly higher than last month.

Raising the retirement age is a key part of the government's pension reform plans, currently in the hands of the Senate after passing the National Assembly, the lower house of Parliament. The Senate may vote on the full spate of reforms by the end of the week.

President Nicolas Sarkozy has a majority in both houses of Parliament, meaning the measures are expected to pass.

Nearly 70 percent of the French public back the unions standing up to the reforms, according to polls published in French newspapers Sunday.