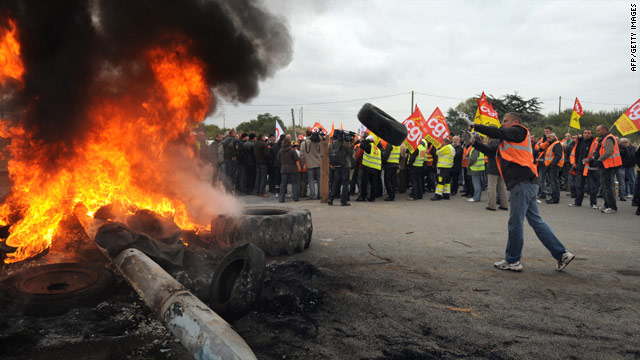 Unions said workers at all 12 refineries were taking part in the strike.

Yves Le Goff, a spokesman for the French Oil Industry Association, said there is currently no rupture in the fuel supply, but that did not stop consumers from lining up at gas stations across the country to stock up on fuel, just in case.

The work stoppage at the refineries was having a direct effect on the two main Paris airports, Orly and Charles de Gaulle. Both are supplied by a pipeline that comes directly from refineries that were shut down Friday, according to Trapil, the company that owns the line.

A spokesman for Paris Airports would not confirm how many days the Charles de Gaulle fuel would last if the pipelines continued to be blocked, but said there was no concern.

"We are not at all worried right now," the spokesman said.

The strike is over government pension reforms, which have passed the lower house of Parliament and are now awaiting approval by the Senate.

Workers are especially upset over plans to raise the retirement age from 60 to 62, a provision that has already been approved by both houses of Parliament. It will not become law, however, until the Senate approves the full spate of reforms.

The strike is the fourth by unions in the past month and the first one to go longer than 24 hours. Unions have said it will be open-ended, with a vote each day about whether to continue the walkout the following day.

French President Nicolas Sarkozy indicated Thursday that his government would not back down in the face of strikes.

"Our duty is to act; to act in the public interest, act with justice, but to act," he said, according to a report in the Paris daily newspaper Le Monde.

Another concern Friday was the increasing number of high school students joining the protest. There were demonstrations Friday in several French cities including Paris, where students were in front of the Senate to protest the bill.

Student protests led to "disruptions" at 342 schools across the country Thursday, the Education Ministry said.

Transportation was suffering only minor disruptions. Local transport services like subways and buses were operating well, though only half of the high-speed TGV trains were running, officials said.