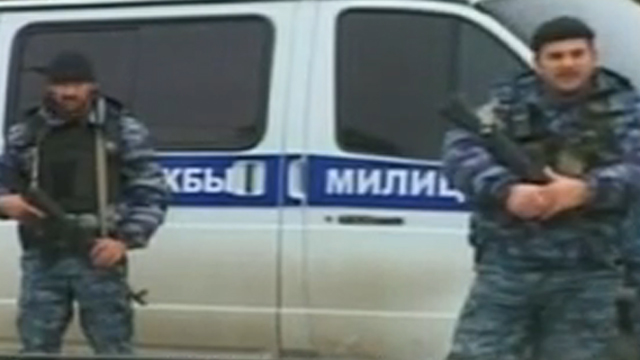 Vladimir Markin of the Russian Prosecutor's Office said two police officers and a civilian died in the attack. Six other officers and 11 civilians were wounded, he said.

However, Chechen President Ramzan Kadyrov later said that only two people remained in the hospital. The others had "sought medical assistance due to minor scratches caused by broken glass, or stress disorders," he said.

A few hours after the attack was reported, the Prosecutor's Office said police had the situation under control.

"The special operation on neutralizing rebels who had stormed into the Chechnya parliament building has just been completed," the office's Investigative Committee said on its website. "All of them were destroyed in a special operation when they showed resistance."

The militants entered the parliament compound as lawmakers were making their way in, according to RIA Novosti, a state news agency.

One of them blew himself up at the entrance to the building, while two others managed to get inside and barricade themselves on the ground floor, Markin said. As they were attacked by security forces, they too blew themselves up, he said.

The explosions caused heavy damage to parts of the building, according to a reporter for the state-run Interfax news agency. Stained-glass windows on several floors were blown out, as were exterior tiles on the building, and some interior walls were demolished, the reporter said.

Russian President Dmitry Medvedev, who was on a visit to France, was informed about the incident, the Kremlin reported on its website.

Local Russian news agencies reported from the Chechen capital, Grozny, that the parliament resumed its work hours after the incident and held a planned session to discuss the republic's budget. Kadyrov was there, as was Russian Interior Minister Rashid Nurgaliyev, who has been in Chechnya on an inspection visit.

Their [the rebels] ideology is akin to the al Qaeda school of thinking.
--Sajjan Gohel
RELATED TOPICS

In 2002, suicide bombers driving two trucks carrying an estimated 1 ton of explosives rammed the gates of another government building in Grozny, killing 72 people and wounding 310.

Rebels in Chechnya started out fighting for independence in the 1990s, but in recent years, the fight has been aimed more at imposing Islamist rule and asserting their authority in the area.

The fight has exacted a heavy toll in the North Caucasus region where Chechnya is located, and has now spread to other regions of Russia.

The standard of living in the southwestern republic is poor compared with the rest of Russia. Unemployment is rampant and infant mortality is high.

In addition, the Chechen population of about 1 million is mostly made up of Sunni Muslims, who maintain a distinctly different cultural and linguistic identity from Russian Orthodox Christians.

The conflict dates back nearly 20 years, with Chechens having laid claim to land in the Caucasus Mountains region. Thousands have been killed and 500,000 Chechen people have been displaced from the fighting.

A Chechen rebel leader took the responsibility for the deadly bombings that rocked two subway stations in central Moscow in March.

In addition, Chechen rebels held 700 audience-members hostage in a Moscow theater in 2002. A Russian effort to free them resulted in the deaths of 120 hostages.

Chechen rebels also were accused of downing two Russian airplanes in 2004. And they took over a school in Beslan in the North Ossetia region in 2004. When the siege ended, more than 330 people had died -- half of them children.

In recent years, the insurgency has moved to the east and the west -- to the republics of Dagestan and Ingushetia, where rebels are fighting troops to destabilize the region.