By Denisa Morariu, for CNN 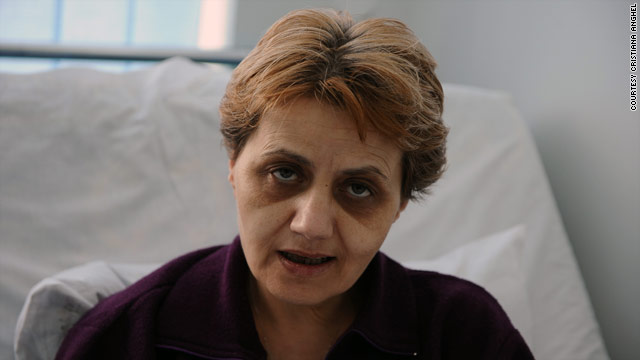 Cristiana Anghel says her protest will end when doctors say they fear she will die.
STORY HIGHLIGHTS

(CNN) -- A Romanian teacher on hunger strike for 59 days lambasted officials in her country's government Thursday for ignoring her protest over drastic austerity cuts, accusing them of treating her as if she did not exist.

Cristiana Anghel has refused to eat since August 24 in protest at 25 percent salary cuts imposed on public servants. In common with many other countries across Europe, thousands of people have been protesting on the streets of Bucharest after the parliament passed the measures in June.

Ten days ago the 55-year-old, who is married with a grown-up daughter, was admitted to hospital in Bucharest and is now under continuous medical supervision.

"The moment I saw nobody cares about a law being broken, and most important, that nobody cares if a human being is on hunger strike, risking her health and life in the name of a principle, I decided I will stop only when I sensitize (the politicians) and make them respect the law," Anghel told CNN.

I will not stop until the politicians understand that Romania is our country and we want it the way it should be.
--Cristina Anghel, Romanian teacher on hunger strike
RELATED TOPICS

Cristiana said she was most angered by the "complete silence of politicians from the power structures."

Doctors have now put Cristiana, who lives in Caracal, in southern Romania, under perfusion of water and sugar, ensuring her brain and liver continue to work, but she maintains she is still on hunger strike.

She has refused to be given perfusions with amino acids that feed her body, and vowed to continue her protest. "I will not stop until the politicians understand that Romania is our country and we want it the way it should be."

She only drinks water, sometimes adding a few drops of orange juice, to get some vitamins. She has been close to death on three occasions when her heart almost stopped beating and she had renal failure.

But Cristiana maintains she does not want to commit suicide, and says her protest will end when doctors say they fear she will die. She does not want to repeat the gesture of her friend Maria Corcoveanu, a colleague at the same school who committed suicide last month because she feared she could not live on the reduced wage.

CNN attempted to contact officials from the Romanian education ministry, but officials declined to comment on the case.