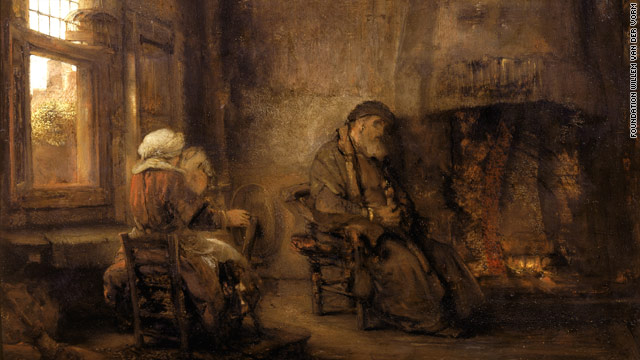 London, England (CNN) -- Since it was discovered hanging on the walls of a Rotterdam museum, a painting thought to be by Dutch master Rembrandt van Rijn has jumped in value by $7 million.

"Tobias and his Wife" (1659), an oil painting on wood panel, was previously attributed to a pupil of Rembrandt's called Barent Fabricius. Since its change in status, the painting, which depicts a man and his wife sitting down near an open hearth, has increased in insurance value from $4 million (€3 million) to $11 million (€8 million).

The painting, currently on display at the Museum Boijmans Van Beuningen, where it was discovered by an expert, is drawing admiring crowds.

Sjarel Ex is the director of the museum. He told CNN that the rush of enthusiasm from the public "was very beautiful to see and be part of."

Not everyone at the museum shares his views, however. The museum's senior Old Master curator, Jeroen Giltaij, who did extensive research into the background of the painting in 1994, does not believe that it is a Rembrandt.

Today, we're very obsessed by who actually painted a picture and the whole cult of the individual and uniqueness and so forth.
--Paul Raison, Christies
RELATED TOPICS

Giltaij was unavailable to explain his reasons for doubting the painting, but according to Ex disagreements like these are not uncommon when it comes to verifying an old artwork.

He said: "Science is always a discourse. As far as I know, nothing in knowledge is completely 100 percent sure, especially when dealing with art in a museum. There is no party line in taste or connoisseurship and so everybody is able to have and to formulate an opinion."

Eighteen months ago, Rembrandt expert Ernst van de Wetering asked to investigate the painting in order to see if he could attribute it to the Old Master. Since then, he has become sure that the painting is indeed an original.

In the latest volume of "A Corpus of Rembrandt Paintings," van de Wetering explained his reasons for believing that "Tobias and his Wife" is by Rembrandt. He argues that the painting bears stylistic similarities to an etching made by the artist in the same year. The attention to detail and the arrangement of the figures also swung him to the opinion it is genuine.

Van de Wetering is widely thought to be the most influential Rembrandt scholar in the world, and chairs the Rembrandt Research Project, which was set up in 1968.

Giltaj may not be convinced of his theory, but it is accepted in Old Master circles that when it comes to Rembrandt, whatever van de Wetering says, goes.

Paul Raison is head of Old Master paintings at Christie's auction house in London. He agreed that van de Wetering is the first port of call when it comes to verifying a Rembrandt.

Van de Wetering authenticated a portrait entitled "Portrait of a man, half-length, with his arms akimbo," which fetched $31.7 million (£20.2 million) at a sale at the London branch of the auction house last December.

"Today, we're very obsessed by who actually painted a picture and the whole cult of the individual and uniqueness and so forth," said Raison.

He added that in the 17th century people were happy to own a work that bore the stamp of the artist's workshop. Now it's a different matter.

Even though contemporary artists including Damien Hirst and Jeff Koons employ assistants to help make their work, when it comes to Old Master paintings attribution to the hand of artist can make a many millions of dollars difference to value.

Verification isn't just a subjective matter, however. According to Raison, scientific techniques are frequently employed to help authenticate an artwork. This helps auction houses such as Christie's to decide not just whether an artwork is by a master or his pupil, but also whether or not it is a forgery.

If the figures could tell, they would tell you that it is Rembrandt
--Sjarel Ex, Museum Boijmans van Beuningen

"If we're worried about dating a picture, we test the pigment and can tell up to a point when certain types of paint were used," he said. He also said that if a work has been painted on a wood panel, a cross-section can be examined to get an accurate date for when the tree itself was felled.

X-radiography, microscopic tests and infrared reflectography help experts look beneath the surface of the painting at the various layers underneath. Old Masters frequently painted over existing paintings, which is the case with "Tobias and his Wife."

According to Raison, forgeries often don't have underlayers, which can raise a red flag for experts.

Van de Wetering used X-radiography to authenticate "Tobias and his Wife." But, according to Ex, so did Giltaij, to the opposite conclusion.

In the end, Ex said, one has to measure everything one knows and reach a conclusion bearing in mind all the different evidence and new advances in scholarship.

With the recent news that a family in upstate New York thinks it has a painting by Renaissance master Michelangelo, causing debate among scholars, the process of verifying a painting can be a fraught business.

Even with the advanced technology used to investigate an artwork, theoretical wrangling can ensue.

As far as Ex is concerned, though, "Tobias and his Wife" is indeed a Rembrandt. Its re-valuation and hiked-up insurance premium, combined with van de Wetering's stamp of approval, should be enough to convince doubters.

"If the figures could tell, they would tell you that it is Rembrandt," he said.