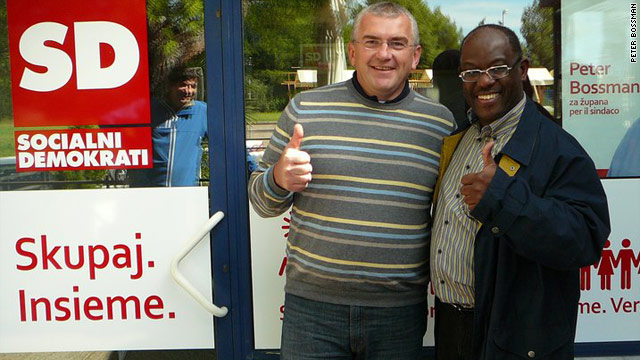 Peter Bossman, seen here on the campaign trail in Darjan, is the first black man to be elected mayor of Piran, Slovenia.
STORY HIGHLIGHTS
RELATED TOPICS

(CNN) -- The small, seaside town of Piran, Slovenia, is thousands of miles away from Washington, but headlines are heralding its new mayor as the city's Barack Obama.

Peter Bossman beat out an incumbent Sunday to become the first black mayor in Slovenia's history, securing 51.4 percent of the vote in a run-off election.

The 54-year-old doctor from Ghana said race rarely came up during the campaign -- though opponents did try to use his accent when speaking Slovenian against him.

"They weren't really very harmful comments. It was more comments like, 'We would prefer to have a real Slovenian be mayor,'" he told CNN Tuesday morning.

There are only about 200 African immigrants in Slovenia, he said.

But Bossman is hardly new to the European nation, which declared independence from Yugoslavia in 1991. He first arrived in the country's capital of Ljubljana as a medical student in the late 1970s, and he has lived in Piran with his wife for more than 20 years.

Bossman, a general practitioner, posted pictures on his Facebook page of campaign promises written on prescription paper -- including history, diagnoses and recommendations for treatment of the city's problems.

His plans for the city of 17,000 include encouraging people to drive electric cars down its narrow streets, building a golf course to draw more tourists and promoting local products.

"We have so many thing going for us here. It's a shame that we don't promote them more," he said.

His campaign strategy paid off at the polls, and captured media attention across the country.

Several weeks before the election, the headline of a column in the Dnevnik newspaper -- sold nationwide -- read, "Peter Bossman for President* (well, first as mayor)."

"When the Americans made a historic move and elected Obama for president, this was a tectonic shift. A new chapter of national history...The real question is whether we are able to do what the Americans did," columnist Vlado Miheljak wrote.

The Obama analogy started at the beginning of his campaign -- and stuck, Bossman said.

"I said that I'm flattered by the comparison, but I'm in no way Obama. I'm Peter Bossman, and I'm just running for mayor of a small town," he said.

And Bossman says he has no plans to seek higher office once his four-year term as mayor ends.

"I want to be a good mayor. I want to help people," he said. "I'm not really thinking about what I'm going to do in the future."