Burning ship limps to port in England after rescue 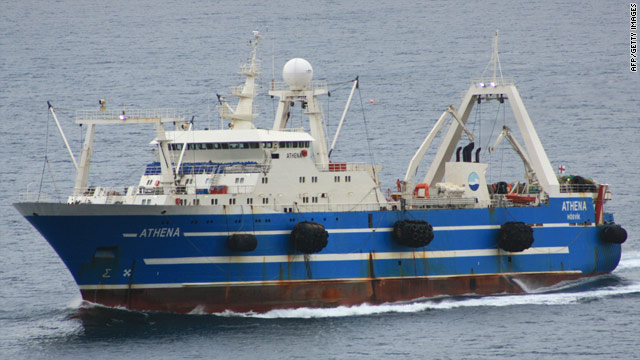 London, England (CNN) -- A fishing ship whose crew had to be rescued from a fire is limping to port in the United Kingdom, the Maritime and Coastguard Agency told CNN Wednesday.

Ninety-eight crew members were rescued from the Athena early Wednesday, while 13 remain on board to keep the fire under control and pilot the ship to port, the agency's Claire Johns said.

The container ship Vega -- which happened to be nearby when the Athena caught fire -- is accompanying the ship to Falmouth, England, where both ships are due Thursday night, she said.

The rescued crew members are aboard the Vega.

The rescue operation was complicated by Athena's distance from land -- some 230 miles (370 kilometers) southwest of the British Isles of Scilly and 270 miles (435 kilometers) west of the Pointe Du Penmarche in Brittany, France.

Because they can carry only so much fuel, British Royal Navy helicopters only had about 20 minutes over the rescue scene before having to return, according to the agency.

A plane was also scrambled from France to help with communications during the rescue, the Coastguard said.

The company that owns the ship does not know the cause of the fire yet, a representative said.

"Hopefully tomorrow when the firefighters come on board (it) will be completely extinguished and cleared and then we will know more about what happened," Sue Philbrow told CNN by e-mail from the Faroe Islands, where the ship is registered.

Five ships responded to the emergency call to pick up crewmembers, who include Chinese, Russian, Peruvian and Scandinavian personnel, among others.

The Athena is a fishing ship that processes fish on board.