Olympic sailors get help from a feathered friend 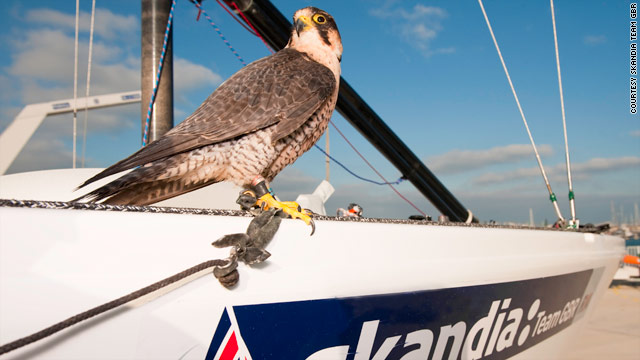 Meet Felix the peregrine falcon, the latest member aboard Skandia Team GBR, who has been brought in to solve the team's pesky seagull problem.

Noise pollution is a major concern, with seagulls squawking early in the morning and disrupting the sleep of the sailors who are training.

"We've had a lot of seagulls in the immediate vicinity of our accommodation area which has meant a huge amount of noise between 5 and 6 in the morning."

Cue Felix, whose arrival has resulted in a "drastic decline" in noise levels in the morning, according to Park.

"It took a couple of days for the seagulls to realize the falcon was there," he said. "But now they know it's best not to bother him."

Using birds of prey is not a new concept in the United Kingdom. Hawks are currently used at some of London's most famous attractions, including Trafalgar Square, to keep pigeons and their mess at bay.

But, Park says, this is the first time a falcon has been used to rid birds in a sporting context.

At present Felix patrols the skies a couple of mornings a week. That's frequent enough to keep the seagulls away. To date, he hasn't harmed any seagulls.

He will be used more regularly before each big competition leading up to the 2012 Olympics, according to Park.

Not only has his job ensured a restful sleep for the sailors, it has also decreased the amount of bird droppings, which causes damage to boats and buildings.

"Seagull droppings are very acidic. It can be difficult to remove and can cause some staining," Park said.

"It doesn't cause any significant performance issue, but it's a major inconvenience," he added.

But says Park, like all team members, Felix's position on the 2012 squad has yet to be secured.

"We've got a couple more test events and he's subject to the same selection criteria as all the sailors. But at the moment, you'd have to say we're fairly confident that things are looking pretty good for Felix's Olympic ambitions at the moment."