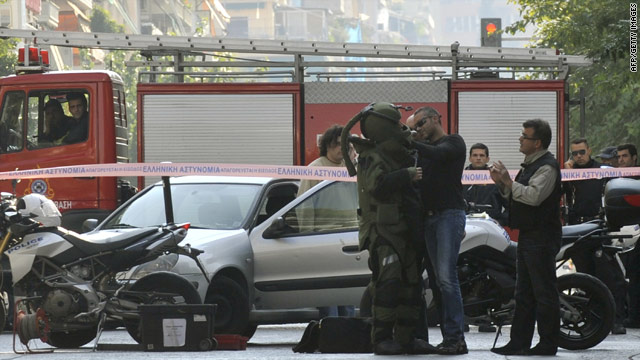 The country suspended air shipments of all mail and packages for 48 hours after the parcel bombs were sent from the capital, the Public Order Ministry announced Wednesday.

Both packages had arrived on flights from Athens, Greece, authorities said.

Two other parcels containing explosives were discovered in the cargo section of the Athens airport on Tuesday, Kokkalakis said. They were addressed to the European Union law enforcement agency Europol, based in The Hague, Netherlands, and the European Court of Justice in Luxembourg, he said.

Authorities detonated both parcels, he said.

At least nine bombs or suspicious devices have been sent in recent days to various embassies in Athens. Police intercepted and destroyed most of them, though one person at a courier office was wounded when a package addressed to the Mexican Embassy exploded, and another device was thrown at the Swiss Embassy and exploded in its courtyard.

Kokkalakis described the bombs as "booby trap bombs. They are hidden in books and some of them are hidden in files, in dossiers."

Two men arrested after the explosion at the courier office have been charged in connection to terrorism.

The Citizens Protection Ministry named them as Panagiotis Argyrou, 22, and Gerasimos Tsakalos, 24.

Both are Greek nationals, police said, and one of them is a suspected member of the Greek leftist militant group Conspiracy of the Cells of Fire.

"Now we have a good start to continue our efforts to disarm these terrorists," said Kokkalakis, who said there was a warrant on one of the arrested men, saying he was a member of the militant group.

Police said they are looking for five other men in their 20s who seem to have links to the same group, but they have not yet linked the group to the spate of bombings.

Vassilis Papadimitriou, a spokesman for the prime minister, called the suspects "amateurs."

"You have to call them terrorists, but what they were trying to do no doubt is something symbolic," he said. "They were caught with bus tickets and cards to make telephone calls. A professional wouldn't do this."

Kokkalakis and Papadimitriou both said that private air-mail shipping companies are responsible for security of packages.