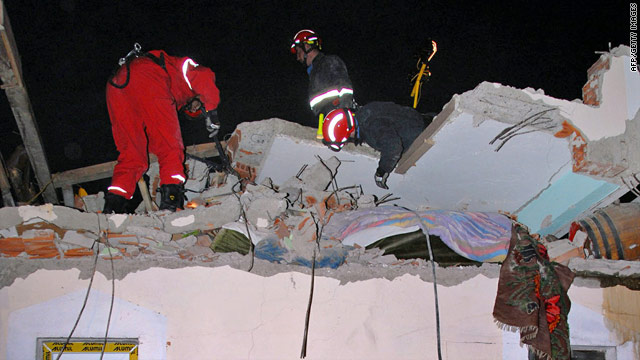 Rescue workers examine the collapsed roof of a building in Kraljevo, in central Serbia, on November 3, 2010.
STORY HIGHLIGHTS
RELATED TOPICS

(CNN) -- Two people were killed and around 100 were injured when a magnitude 5.4 earthquake struck central Serbia overnight, the Ministry of Internal Affairs said Wednesday.

The earthquake happened at 1:56 a.m. (just before 9 p.m. ET). The epicenter was near the city of Kraljevo, about 80 miles south of the capital, Belgrade.

Many buildings were damaged, including the hospital in Kraljevo, but no patients were hurt, the ministry said, adding parts of the city were without electricity or water.