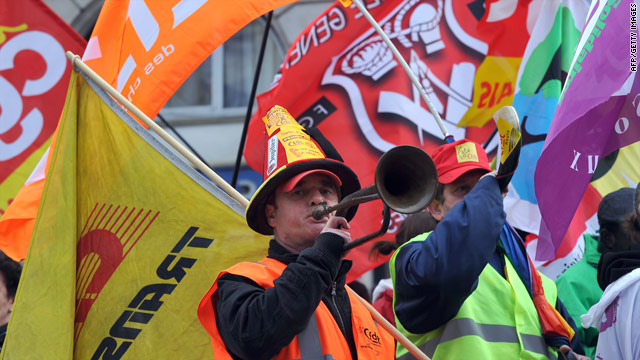 Paris, France (CNN) -- Demonstrators returned to the streets across France Saturday to protest changes to the country's retirement law, but the numbers of marchers were lower than they had been in previous weeks.

Interior ministry officials said about 375,000 people were out throughout the country Saturday -- a significantly lower number than the 560,000 people that turned out on October 28 and the 1.1 million on October 19.

More than 200 demonstrations were scheduled for Saturday, called by the same unions that called the previous strikes.

The retirement bill people are protesting has already been passed. Both the Senate and the National Assembly have approved the measure, and it is currently under review by the Constitutional Council. French media say the body will not complete its examination of the bill until December 2. President Nicolas Sarkozy is expected to sign it into law some time after that.

Sarkozy has been one of the measure's strongest backers. It would raise the country's retirement age from 60 to 62, and make other changes in pension rules. Sarkozy's government has insisted the adjustments are necessary in order to save money. It has set for itself the ambitious goal of cutting the French deficit from 8 percent to 6 percent of the gross domestic product by next year.

Still, the bill has been hugely unpopular with the French public. Saturday's protest was the eighth day of national action called by unions since the beginning of September. Anti-reform strikes closed all of the country's oil refineries last month.

A spokesman for the Ministry of Finance told French broadcaster Europe 1 that the strikes cost the country 200 to 400 million euros ($280 to $560 million) per day.