Pompeii's House of the Gladiators collapses 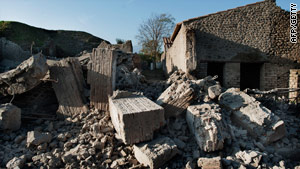 Archaeologists are trying to determine what caused the 2,000-year-old House of the Gladiators to collapse.

Rome, Italy (CNN) -- One of the most archaeologically important houses in the ancient Roman city of Pompeii collapsed during the early hours of Saturday morning.

The House of the Gladiators -- thought to have been used by combatants to train or relax before entering the nearby amphitheatre -- crumbled at 3am GMT said Antonio Varone, director of excavations at the site.

Varone said the cause of the collapse was not yet known and that archaeologists were inspecting it to assess the damage, although the Italian Culture Minister Sandro Bondi said on Sunday he believes the damage was caused by faulty restoration in the 1950s and by the recent heavy rains.

The house is closed to the public but is still one of the most popular attractions in Pompeii.

Italian President Giorgio Napolitano said in a press statement: "We should all feel shame for what happened."

Pompeii, near Naples in the south of Italy, is one of the most important archaeological sites in the country -- it received 2.2 million visitors in the first 10 months of 2010 generating $23.8 million according to Varone.

Pompeii was destroyed in AD79 when a volcanic eruption from nearby Mount Vesuvius buried the city in ash. It was not uncovered until the 18th century.