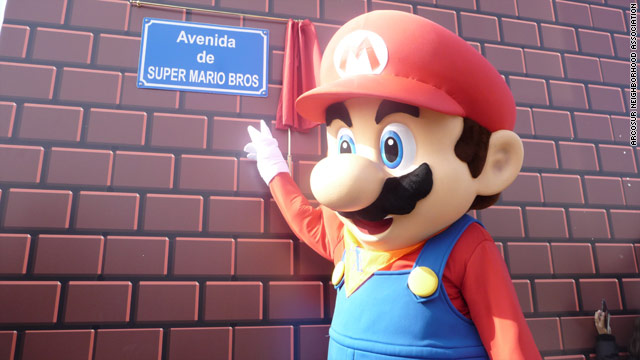 (CNN) -- The future residents of a new Spanish neighborhood say they are the first in the world to name their street after the Super Mario video game character.

But the cartoon plumber character, who turns 25 this year, isn't the only one who will be honored by residents of Arcosur, which is still under construction.

Other planned roads in the neighborhood include streets named for "Sonic the Hedgehog," "Space Invaders" and "The Legend of Zelda."

Video games won out over more traditional options in an online poll that residents used to pick their street names, said Antonio Almudi Miranda, president of the Arcosur neighborhood association.

The government-sponsored Arcosur project aims to build more than 21,000 residences for people ages 20 to 35 who are buying their first homes, he said. Construction began last year.

A dozen of the development's streets will be named for video games, Almudi said. Names of musical composers and Spanish monuments will grace the neighborhood's remaining 46 roads.

Super Mario's street is nearly a kilometer long and will have hundreds of homes on it, Almudi said -- and his will be one of them. The English and math teacher said he's looking forward to living on a street named after someone his students will recognize.

Residents are proud to have Super Mario represented in the neighborhood, he said, and grateful that their street signs will not feature names of war heroes or violent characters.

But there's also a serious side to the publicity stunt, he said. Future residents hope increased media attention will pressure the government to finish building the neighborhood on time -- by June 2012.

"We wanted to make noise and show that there are a lot of us who are in this neighborhood," he said. "We want our homes now, because we are many young people and we have been waiting."

Once it's constructed, more than 60,000 people are expected to live in the neighborhood, Almudi said.

"The majority of us are lawyers, police officers, engineers, businessmen, teachers and hard workers of all kinds," he said. "Surely we have a lot of plumbers."