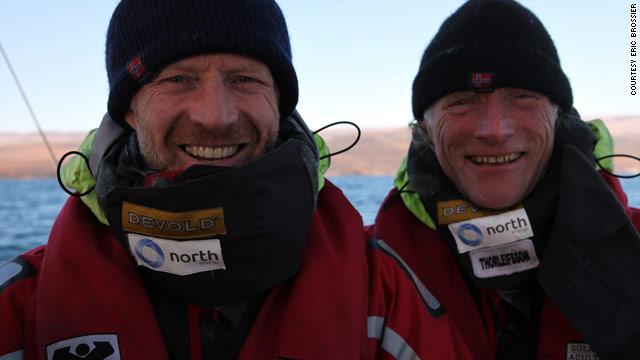 The crew of the "Northern Passage" circled the North Pole in three and a half months.
STORY HIGHLIGHTS

Ousland and the crew of the "Northern Passage," a small fiberglass sailing boat, recently completed an 18,000-kilometer voyage around the Arctic, crossing through both the Northeast and Northwest passages in just three and a half months.

The journey around the North Pole was completed in a single summer -- a feat that before this year, hadn't ever been accomplished by a small boat.

Led by Ousland and skipper Thorleif Thorleifsson, the "Northern Passage" departed from Bergen in Norway in late June and circumnavigated the Polar Basin before the onset of winter.

Shortly after returning to Oslo last month, Ousland spoke to CNN about the perilous race against time and the elements.

This trip would have been impossible 10 years ago.
--Norwegian adventurer Borge Ousland
RELATED TOPICS

"In the darkness I was standing tied onto the mast shouting directions to Thorleif who was steering the boat through huge ice lumps that were moving about in the waves," he said, recalling the scariest moment of the journey.

Ousland and Thorleifsson traveled both the Northeast and Northwest passages in a 10-meter, multi-hulled trimaran, at times sailing 24 hours a day to complete the voyage in a single summer season -- before the passage sealed with ice.

The two Norwegians undertook the audacious voyage to highlight the rapid melting of the Arctic ice cap.

"This trip would have been impossible 10 years ago," Ousland told CNN. "But then in 2007 we saw that the Northeast and Northwest passages [of the Arctic] were open at the same time."

The famously inhospitable region, bordered by Norway, Russia and Canada, used to be considered virtually inaccessible, with thick ice making the area all but impassable.

But the Arctic's ice cover has receded swiftly in recent years -- the Northeast Passage even opened to cargo ships in the last few years.

"That's why we wanted to take this small boat -- it's not an ice breaker, it's not even made of steel -- and sail it around the Arctic to show people what is happening."

Five additional crew members joined the two men at various stages of the journey, including the tricky navigation of Baffin Bay, an area between Canada and Greenland that is riddled with massive icebergs.

"We needed more people aboard to keep constant guard as we sailed 24 hours to get through before the passage froze up," Ousland told CNN.

The Northern Passage wasn't alone in its attempt to make history as the first boat to circumnavigate the Arctic in a single season. Russian boat Peter I traveled at almost the same time.

"We had a little friendly competition with the Russians," said Ousland. "We met these guys in several places along the trip and we drank tea and helped each other out."

Both crews are now claiming the record.

For Ousland, more important than setting a sailing record is bringing attention to the plight of the Arctic ice cap.

Having trekked across the North Pole five times in the last 20 years, Ousland said he's horrified by the environmental deterioration that's taken place.

"The Arctic is usually full of life -- lots of seals, whales, birds -- but when you don't have any ice, it's like a desert," he told CNN.

"The sea was completely dead. The wildlife is dependent on the drift ice for food and shelter. If it melts, it melts and then it's gone. The wildlife doesn't have any time to adapt to the new situation."