William and Kate: The web's response 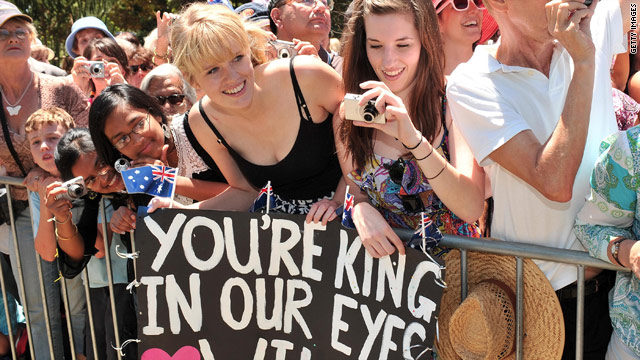 Fans of Britain's Prince William await him in Sydney during his unofficial visit to Australia in January 2010.
STORY HIGHLIGHTS

London, England (CNN) -- Within seconds of the Clarence House announcement, social media was abuzz with news of the royal engagement.

"Prince William" and "Kate Middleton" quickly shot to the top of Twitter's trending topics, where comments on the social network were mainly congratulatory.

Some tweeters were already agog with excitement about the wedding day. Amy Patel (therealamypatel) tweeted, "Does Kate Middleton have to pick a traditional wedding dress? - can't wait to follow the royal wedding planning!" and Adam Huckle Films (adamhucklefilms) posted, "Better buy a fancy hat." Angeldirecto was already keen for memorabilia: "Somebody send me a tea towel or a plate w/ their faces!"

The shadow of Diana, Princess of Wales could be perceived in some comments. Evangeline Holland (evangelineh) posted, "I hope Prince William and Kate Middleton will have a (relatively) normal marriage."

Others expressed their hopes that the wedding would be a modest affair.

Didi Vonmonied (MissDeeN) said, "So will Kate and Wills have a budget wedding? In these times of austerity, we need to watch the pennies," while Matt Davies (matt_davies) said, "Given that 'we're all in this together' and most of us will be homeless by next summer, the royal wedding will be a toned down affair, yes?"

Does Kate Middleton have to pick a traditional wedding dress? - can't wait to follow the royal wedding planning!
--Amy Patel (therealamypatel) on Twitter

Some of Prince William's fans, such as Ewa Pandjaitan (EP2410), expressed distress at the news. "Oohhh, heart broken," she said. "My my my." User omg_ilubit expressed wry disbelief: "What? Prince William is engaged? I don't remember him proposing to me."

The announcement also saddened some of Kate Middleton's male fans. Tweeter Tommy Rose (tomdotcom1) posted, "Sad times. The prospect that one day I would be able to marry Kate Middleton was the only thing keeping me going. :-("

Other supporters took a more positive view. Nick M (niknakm) posted, "Kate Middleton is going to be the hottest queen ever!"

Some British-based tweeters hoped for an extra day off to celebrate the couple's marriage: Tweeter James Farrier (jamesfarrier) said, "I know what we're all thinking - congrats William and Kate Middleton...but more importantly... #extrabankholidaynextyear?"

The announcement was followed by a swift flurry of updates on Wikipedia to reflect the engagement.

Facebook groups, including "Congratulations Prince William & Kate Middleton" and "Wedding Of The Century! Kate & William," also quickly sprang up to congratulate the couple.

Prince William: A life in the spotlight

But some remained untouched by the announcement.

Tweeter Nicola (refusion) tweeted, "Dear twitter, I don't care about the fact that Prince William and Kate Middleton are getting married. Please stop talking about it."

With the world's eyes on the happy couple and the media storm only likely to intensify, she's unlikely to get her wish until well after the wedding.