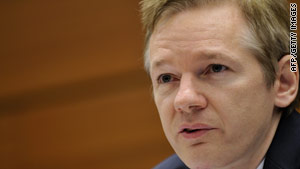 A formal court procedure to decide whether to arrest Assange scheduled for Thursday afternoon.
STORY HIGHLIGHTS

(CNN) -- The Stockholm Criminal Court on Thursday issued an international arrest warrant for WikiLeaks founder Julian Assange on probable cause, saying he is suspected of rape, sexual molestation and illegal use of force.

The court also ordered Assange arrested in his absence, which requires Swedish authorities anywhere in the world to detain Assange if they come across him. Sweden's director of prosecutions, Marianne Ny, had requested the arrest in absence.

"The background is that he has to be heard in this investigation and we haven't been able to get a hold of him to question him," Ny said earlier Thursday.

Assange faces five counts that appear related to two incidents, according to the request Ny filed with the court.

Assange could be sentenced to at least two years in prison if convicted, according to the document.

It is the first time authorities have mentioned probable cause. The molestation charge, previously mentioned in the case, has also been upgraded to sexual molestation.

In a news release issued after the court's decision, Assange's British lawyer said the charges stem from consensual sexual relationships his client had with two women.

"Only after the women became aware of each other's relationships with Mr. Assange did they make their allegations against him," lawyer Mark Stephens said in the statement.

Stephens also said neither he nor Assange "have ever received a single written word, at any time, in any form, from Swedish authorities on the Swedish investigation against our client."

The media has been the only way they've learned substantial information about the investigation, Stephens said. He called it "a clear contravention to Article 6 of the European Convention, which states that every accused must be informed promptly, in a language which he understands and in detail, of the nature and cause of the accusation against him."

It was unclear where Assange was Thursday. Stephens told CNN he could not reveal his client's location.

Swedish prosecutors announced over the summer they were investigating Assange in two separate cases of rape and molestation. Ny said then there was reason to believe a crime had been committed, but that more investigation was necessary before she could make a final decision.

Assange has maintained he is innocent, telling the Arabic-language television network Al-Jazeera the accusations were a "smear campaign."

Assange repeatedly declined to answer questions about the rape and molestation investigation and what the allegations may mean to his organization when he spoke to CNN's Atika Shubert in October.

"This interview is about something else. I will have to walk if you are ... if you are going to contaminate this extremely serious interview with questions about my personal life," he said. Moments later, he walked off the set.