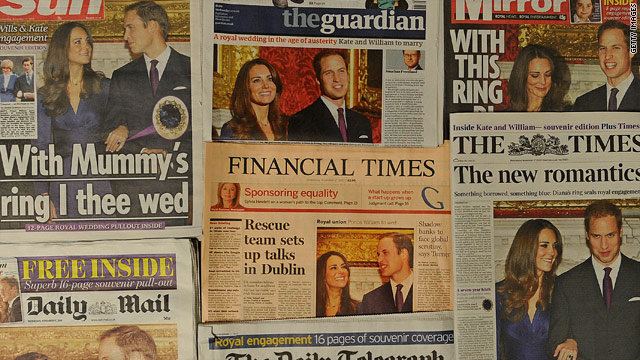 British front pages hailed the royal engagement but not all in the UK were as deferential.
STORY HIGHLIGHTS

London, England (CNN) -- British royal weddings and the engagements that precede them have traditionally been occasions characterized by state-managed pageantry, popular euphoria and celebratory media coverage.

At first glance, reaction in the UK to the announcement of the forthcoming nuptials of Prince William and Kate Middleton conformed to type. London's Evening Standard newspaper hailed "a royal wedding to cheer the nation" while even the left-wing Guardian entered the fray, commenting: "Even the most hardbitten republican will be wishing them well."

Speculation over the date and venue filled hours of TV coverage and close-up images showed off the ring, once worn on the occasion of a previous royal engagement by William's mother, Princess Diana.

Yet, beyond the headlines and photo opportunities, it was not hard to detect notes of dissent and skepticism, especially on social media.

Much of the early reaction on Twitter focused on whether Britons could look forward to an extra public holiday in 2011. Elsewhere there was concern over who would foot the bill at a time when the UK is undergoing painful cuts to public services.

William and Kate: The web's response

Some even questioned the timing of the announcement on a day when the British government said it would pay compensation to detainees held at Guantanamo Bay and Prime Minister David Cameron dropped plans to put a personal photographer on the public payroll.

"On Twitter instantly there were a lot of cynical responses," media commentator Charlie Beckett told CNN. "There was a very strong response from a lot of republicans who don't like the monarchy, and from perhaps cynical journalists who can't bear the idea that they'll be covering this stuff for six months."

Summing up the attitude of those caught in the crossfire, Matthew Norman of the Independent newspaper wrote: "Barring some heartrending split between this depressingly inoffensive young couple, we're stuck with months of mawkish drivel from determined royalists and vinegary carping from committed republicans. For those of us stuck somewhere in the indifferent middle, it's going to be hell on earth."

Dominic Sandbrook, author of "State of Emergency," a new history of the UK in the early 1970s, told CNN that Britain had become a "post-deferential society" since the engagement of Prince William's parents, Prince Charles and Princess Diana, in 1981.

"With Charles and Diana there was a much greater sense of awe for the monarchy and reverence for institutions," said Sandbrook. "Even though it wasn't that long ago we were a much more deferential society. What has changed is that we live now in a much more populist individualist society. Although monarchist sentiment is still very strong, people are uneasy with kowtowing to institutions."

The tragic trajectory of Princess Diana from fairy-tale bride to her messy breakup from Charles and death in a Paris car crash in 1997, and the fact that three of Queen Elizabeth's four children have been through divorce, has led some to wonder whether the country will fall so easily for another royal romance.

"It's still the same in that everyone loves a royal marriage and everyone loves a princess, particularly a princess who is going to be queen, but I don't think we believe in fairy tales any more," Andrew Neil, the former rector of the University of St. Andrews where both William and Kate studied and former editor of the Sunday Times, told BBC radio.

"Looking back at the wedding in the early '80s it did seem to have a fairy-tale quality to it. I don't think we'll be conned a second time. I think we're a little bit more cynical, maybe a bit more realistic."

Yet the fact William and Kate have had a "normal" relationship, with the bride coming from a wealthy middle-class background rather than blue-blooded aristocracy, also demonstrates the monarchy's enduring ability to reinvent itself for the times, says Sandbrook.

While royal marriages for centuries were arranged affairs of dynastic diplomacy, the course of William and Kate's eight-year relationship shares something in common with many modern couples.

Kate Middleton: From college sweetheart to queen in waiting

"Their story is that of an awful lot of young married couples; they met in their late teens at university, they've been going out for a long time, they've been on and off... That's something that a lot of us can relate to in one way or another," said Sandbrook. "It makes it easier for society at large to see them not necessarily as role models but as reflecting the experience of the majority of the population."

In the 18th and 19th centuries, when the royal family was often extremely dysfunctional, it just kept going anyway and people thought it was funny.
--Historian Dominic Sandbrook
RELATED TOPICS

Republicans however argue that the forthcoming royal wedding should be used to highlight the irrelevance of the institution of monarchy in a modern democracy.

"The monarchy thrives on people not giving it any serious thought, not treating it as any more than a tax-funded soap opera. But big events like this push the issue up the agenda, force people to think critically about the monarchy," said Graham Smith, a spokesman for the Republic campaign group, which claims on its website that it has 10 million supporters.

But Sandbrook said the suggestion that the endurance of the monarchy was dependent on public support or that members of the royal family should behave as role models was a relatively modern idea.

Far from being respected, the monarchy had been popularly mocked and lampooned for most of its history, he said. In one cartoon of the Prince of Wales published in 1792 by the infamous caricaturist James Gillray, the future George IV is portrayed as a dissolute figure, picking his teeth after a heavy meal surrounded by empty bottles, pills, unpaid bills and gambling dice.

"One of the great myths of the monarchy is that its survival rests on enormous popular admiration. Actually in the 18th and 19th centuries, when it was often an extremely bizarre, dysfunctional family, it just kept going anyway and people thought it funny," said Sandbrook.

"You could hardly have a greater soap opera than Henry VIII and his wives or George IV carrying on like a debauchee. The anomaly was from the 1920s to the 1970s when the monarch tried to brand itself as the absolutely perfect family."

Still, says Beckett, responses to the engagement on Twitter suggest that many Britons will happily enjoy the spectacle and distraction of a royal wedding, without worrying too much about the modern-day relevance of the monarchy.

"You've got a stream of people saying that this is going to be fun, that in very difficult days economically this is going to be one hell of a party. So even if people are a bit cynical about the royals, even if they don't have the same respect that they used to, they are going to enjoy this."