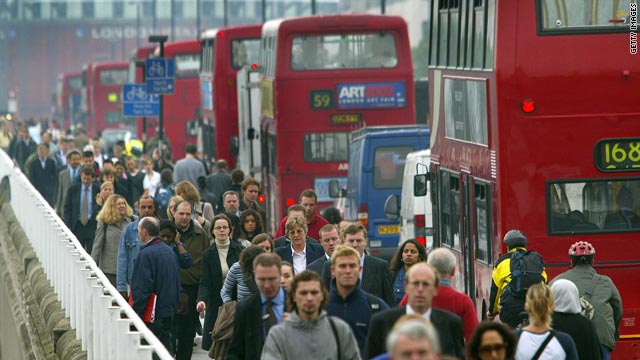 London is trialing a solution that "literally sticks" pollution from motor vehicles to the road to improve air quality.
STORY HIGHLIGHTS

London, England (CNN) -- The pea-soupers maybe a thing of the past but London still has some of the worst air quality in Europe.

So Mayor Boris Johnson is hoping a new trial on two of the UK capital's busiest thoroughfares will help the city avoid a maximum £300 million ($400M) fine from European regulators.

The six-month trial which started this month will see sections of two busy London streets sprayed with a special solution which traps harmful dust particles on the road.

"We have scoured the globe to find new ways to tackle pollution and found this wonderful contraption that tackles air quality head on, sticking particles to the roads' surface and preventing their dastardly escape back into the air we breathe," Johnson said in a statement.

Put your question to a city mayor

The "dust suppressant" solution will be applied several times a week to the Victoria Embankment and the Marylebone and Euston Roads by a specially-modified gritting lorry and will cost £300,000 ($480,000).

How urban living affects your brain

TfL is aiming to reduce PM10 pollution by 10-20 percent in the treated areas.

The results of the trial will be published in autumn 2011.

But Simon Birkett, founder of Campaign for Clean Air in London (CCAL), isn't convinced the trial will offer tangible benefits to Londoners.

"Offsetting is never a sound, sustainable solution. You need to tackle the source if you're going to get a long-term solution," Birkett told CNN.

"What [Johnson's] trying to do is target those individual spots, hoping he can cheaply avoid the legal problems which are £300 million fines ($400M)."

Birkett is referring to the maximum fines levied by the European Union (EU) on member states whose air quality doesn't fall within safe standards.

Earlier this year, the UK exceeded the EU's limit of 35 "bad air" days and has been issued with a final warning.

Since his election as London mayor in 2008, Johnson has implemented a range of measures to improve the city's "green" credentials.

A new cycle hire scheme was launched in July, an electric car scheme will be rolled out in 2011 and hybrid buses, which Johnson says are 40 percent cleaner, are gradually being added to London's bus fleet.

"If you live in a city, chances are you might not even notice just how polluted the air has become
--CNN's Dr Sanjay Gupta
RELATED TOPICS

Berlin's low emission zone (LEZ), which started in 2008, is centrally located and prohibits high polluting vehicles inside it whereas London's LEZ covers most of Greater London and charges polluting vehicles up to £200 ($320) a day.

"What we also need to do is have boiler scrappage scheme and a big campaign to build public understanding of the problems, because you actually want people to mitigate and adapt. People should use public transport or walk and cycle rather than drive where possible."

As Birkett points out, around 50,000 deaths are attributable to air pollution in the UK every year.

Worldwide, the World Health Organization (WHO) puts the figure at around two million, with half of these deaths occurring in cities.

"If you live in a city, chances are you might not even notice just how polluted the air has become," according to CNN's Dr Sanjay Gupta.

Within four days of breathing city air, Gupta says, your body becomes adjusted to it. And this happens despite your airways becoming more inflamed and restricted which raises your risk of heart and lung problems.

WHO says the problem is "largely beyond the control of individuals and requires public authorities to act at all levels."

But they say cities like Bangkok are showing that a "multi-pronged strategy" is the way to a cleaner urban future.

All of which, says the BI, are helping Thailand's capital work towards air quality which approaches the standards set in many European cities.