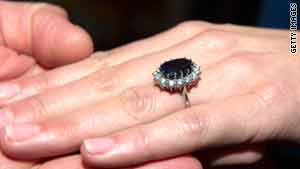 Nearly eight in 10 of those surveyed agreed the engagement is good for the future of the monarchy.
STORY HIGHLIGHTS

London, England (CNN) -- The British public is largely positive about the engagement of Prince William and Kate Middleton, with more than three-quarters of those surveyed believing it will be good for the monarchy, a ComRes poll conducted for CNN showed Friday.

Opinion was split, however, on who should succeed Queen Elizabeth II to the throne -- though more respondents believed William and his fiancee would make a better king and queen than Prince Charles and Camilla, the Duchess of Cornwall.

In general, older people and those in higher income groups were more likely to take a traditional line and be more favorable toward Charles and Camilla, compared to those who are younger or in poorer income groups, according to the poll, which surveyed 2,015 adults in Britain between Wednesday and Friday.

Nearly eight in 10 of those surveyed -- 79 percent -- agreed that William and Middleton getting married is good for the future of the monarchy. Three percent disagreed and 18 percent said they didn't know.

Respondents who were older were more likely to agree with that statement than those who were younger -- 87 percent compared to 73 percent, the poll showed.

Roughly half of respondents -- 51 percent -- said they believe Prince Charles, the next in line to the throne, has earned the right to take on the role of monarch after Queen Elizabeth. Nearly one-third -- 31 percent -- disagreed.

Those in higher income groups were more likely to agree that Charles has earned that right, the poll showed.

The last question was whether William, the second in line to the throne, should become the next monarch instead of his father. Forty-five percent of respondents agreed, while 41 percent disagreed.

The online poll had a 3 percent margin of error.