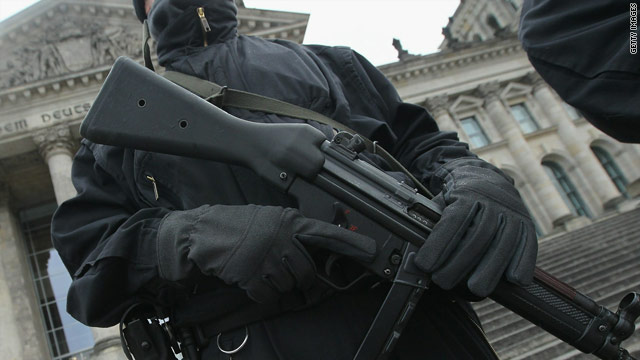 The suspects were using a jihadist website to plan an attack on an unspecified target, police said.

"Long months of undercover investigation" led to the arrests, the authorities said.

It was "clear to us that the target was Belgian soil, just not clear enough to say where and when," Belgian public prosecutor Lieve Pellens told CNN.

Seven of the arrests were in Antwerp, Belgium, she said. One was in Aachen, Germany, and the other three were in the Netherlands. Those arrested are Belgian, Dutch, Moroccan and Chechen, authorities said.

A senior European counter-terrorism official told CNN that members of the group arrested in Antwerp, and their associates in Germany and the Netherlands, had discussed targeting Jews in Belgium as well as NATO vehicles in the country. However, officials say no specific targets appear to have been identified.

Authorities tracked discussions between members of the group through wiretaps, the official says, and a second European source confirmed the intercepts of discussions related to NATO. However, NATO's headquarters in Brussels does not appear to have been a target of the group, the source told CNN.

Authorities are investigating the links between members of the Antwerp group and Sharia4Belgium, a Belgian Islamist organization, a Belgian counter-terrorism official told CNN.

The investigation, which also looked into the financing of what police called a Chechen terror organization, has been going on since late 2009, according to a statement from the Belgian prosecutor's office.

On Tuesday, 10 of the suspects will face a judge, who will determine whether police can continue to hold them for more questioning, the Belgian officials said.

The arrests wrap up the investigation, Pellens said.

Several other people had already been arrested in Spain, Morocco and Saudi Arabia during the investigation, police said, without saying when the arrests took place or how many people were detained.

The Antwerp investigation began after a U.S. intelligence agency passed on intercept information to its Belgian counterparts, an intelligence source told CNN. But Pellens said Belgian police were alerted to the group's activity because they used the Ansar al-Mujahideen website.

The sources say police have visited 15 locations in Brussels, Belgium's capital, as part of a continuing investigation into a terrorist cell linked to Bassam Ayachi, who was charged in 2009 with preparing terrorist attacks.

The intentions of that cell are "dangerous but not imminent," Pellens said.

Ayachi, a French citizen, was detained in Italy in 2008. He was head of the Belgian Islamic Center (Centre Islamique Belge or CIB), based in Molenbeek in Belgium.

A senior European counterterrorism official also told CNN that one of the people targeted in the Brussels operation had engaged in jihadist activities in Iraq and returned to Belgium two years ago.