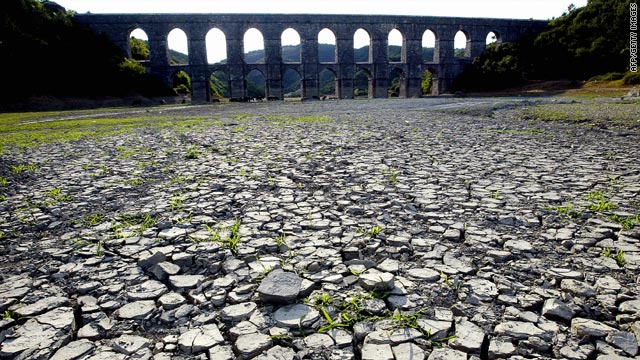 London, England (CNN) -- A rise in global temperatures of four degree Celsius is likely to occur during the 21st century causing "devastating impacts" if greenhouse gas emissions continue rising at the current rate, according to a group of international scientists.

In a special issue of the UK journal "Philosophical Transactions of the Royal Society A" -- which coincides with the start of the United Nations climate talks in Cancun, Mexico -- scientists argue that delays in reducing emissions is making the target of two degrees Celsius -- a rise currently deemed safe by scientists -- "extremely difficult" and "arguably impossible" to achieve.

This, they say, raises the prospect of dangerous temperature rises later in the century.

Kevin Anderson, co-editor of "Four degrees and beyond: the potential for global temperature increase of four degrees and its implications," told CNN: "Emissions are going in completely the wrong direction. A rise of two degrees Celsius is much more challenging than is widely accepted."

In some parts of the world, there could be variations as high as 10-15 degrees Celsius
--Kevin Anderson, UK's Tyndall Center for Climate Change Research

A range of papers examine the various effects temperature rise would have on rainforests, sea-levels, agriculture and water supply, as well as trying to predict when four degrees might be reached.

The UK's Met Office Hadley Center estimates that at current emissions trajectories it could be by the 2070s, but perhaps as early as the 2060s.

It might not seem a lot, and for people living in northern Europe it might sound highly preferable given the early onset of winter this year. But what's important to remember, Anderson says, is that four degrees Celsius is a global mean figure.

"Most of the world is covered in oceans and take a lot longer to warm up. So what you would expect to see is a higher average temperature on land and much higher variations in some parts of the world, where there could be variations even as high as 10-15 degrees Celsius," said Anderson, director of the UK's Tyndall Center for Climate Change Research.

"These sorts of changes will certainly have some devastating impacts for eco-systems and for many people living around the planet."

If the scientists are right, sea levels could rise two meters by the end of the century, displacing around 2.5 percent of the world's population over the course of the century.

Furthermore, rainforests will be at risk of retreat in eastern Amazonia, Central America and some parts of Africa, according to a paper by Przemyslaw Zelazowski from the Environmental Change Institute at the UK's Oxford University.

Forests in Africa's Congo Basin may expand Zelazowski says, which would tally with a recent study by the Smithsonian Tropical Research Institute (STRI) which suggested rainforests flourished in a previous warming event 56 million years ago.

But Klaus Winter, a staff scientist at STRI conceded that "horror scenarios probably have some validity if increased temperatures lead to more frequent or more severe drought..."

What is not in doubt, according to scientists, are the "daunting challenges" facing agricultural development in sub-Saharan Africa as smallholders are left with dwindling options for crop and livestock production.

Anderson concedes that skeptics will continue to question the validity of climate predictions given the recent "climategate" emails and reporting errors in the 2007 report by the Intergovernmental Panel on Climate Change (IPCC).

He says predictions are "an innately more difficult area of science to get some robustness on," but stresses these papers represent a "conservative" analysis.

"What we do know, with a high degree of certainty, is that emissions are going up and we know the sorts of rates they are going up at. Unless we see some significant changes we are going to see some much higher temperatures," Anderson said.

He says now is the time for the United Nations to show some courage and leadership.

"We don't not have the luxury of allowing for lots more negotiations and for future technologies to get out of this problem we have got ourselves in to. We need action now in 2010."