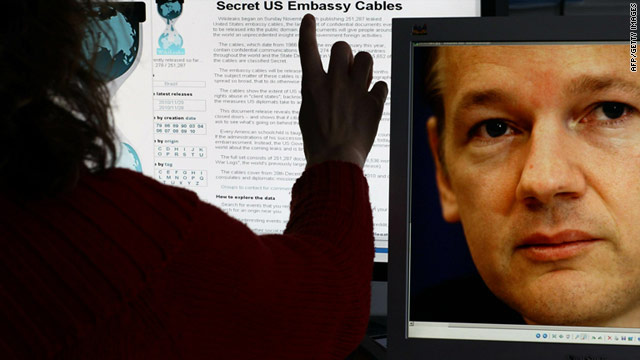 Julian Assange's lawyer has told CNN that security services "in a number of countries know exactly where Julian is."
STORY HIGHLIGHTS

London, England (CNN) -- British police asked Swedish authorities Thursday for additional details not specified in an initial arrest warrant for Julian Assange, a possible indication that the location of the elusive founder of WikiLeaks is known.

The fact that British police are seeking more information probably means there is a procedural problem preventing them from arresting Assange, said an U.S. expert on extradition. The additional details could provide them with a valid warrant.

"They either know where he is or they have been watching him," said Douglas McNabb, a lawyer who specializes in federal criminal defense law and extradition cases. "There's some legal problem there."

Assange is wanted in Sweden for sex-crime allegations that are not related to WikiLeaks. Meanwhile, the website continued publishing confidential diplomatic information that has been stirring up all corners of the world.

Assange, who has said he has long feared retribution for his website's disclosures, has denied the sex-crime allegations, calling them a smear campaign.

Despite the warrant and an Interpol red notice, akin to an all-points bulletin, Assange has so far eluded arrest, making him one of the world's most wanted fugitives.

Assange spoke at London's City University on October 5. After that he appeared in Switzerland for a speech, and at the end of the month sat down for a CNN interview in London.

But he has not been seen in public since the Stockholm Criminal Court issued an international arrest warrant on November 18. Officials say Assange is suspected of rape, sexual molestation and illegal use of force.

Swedish authorities said they do not know where Assange is, but Anne Ramberg, secretary general of the Swedish Bar Association, said Thursday that it would be reasonable to assume that Sweden suspects Assange is hiding out in Britain, given the exchange of information over the warrant.

That hunch was backed up by a report in a British newspaper Thursday that said police are "fully aware of where he is staying."

The paper cited police sources saying that Britain's Serious Organised Crime Agency has so far refused to authorize the arrest of Assange, who they believe is somewhere in southeastern England.

Assange's British lawyer told CNN on Wednesday that security services in a number of countries know exactly where Assange is.

"We have a cooperative approach between our security services in the UK and those in Sweden," said Mark Stephens. "And they do with the U.S.A. So all the information about Julian and his movements, I think, would be pretty transparent amongst NATO allies."

But Swedish authorities said they were not aware of Assange's whereabouts.

"All we have heard is what has been reported in the media -- that he is supposed to be in the UK -- but we have no information at all of his whereabouts," said Tommy Kangasvieri, head of the international unit at the Swedish National Criminal Police.

The Swedish Prosecution Authority said it would send additional information to British police that would lay out the allegations of sexual molestation and illegal use of force -- in addition to the accusation of rape that was already in the warrant -- and the potential penalties attached to each alleged crime.

Assange, meanwhile lost a legal bid in the Swedish Supreme Court, which refused Thursday to hear an appeal of an arrest warrant for suspicion of rape and sexual molestation. Previously, the Swedish Court of Appeal had rejected Assange's appeal.

"After studying the material, the court does not find reason to hear the case," the court said.

Bjorn Hurtig, Assange's Swedish lawyer, said Assange was deeply disappointed by the Supreme Court's decision and that he would pursue other international options, including an appeal to a European court.

"You shouldn't count us out yet," said Hurtig, declining to comment on Assange's whereabouts or when he spoke with his client. Instead, he slammed the Swedish prosecutor's handling of the case, as he has done before.

"From the very beginning they didn't tell us anything," he said. "It wasn't until when the request to have him arrested in his absence that I was able to get a better picture of what he was accused of so that I could prepare his defense."

At Sweden's request, Interpol has issued an international wanted-persons alert for Assange to its 188 member countries. The red notice is not an arrest warrant, but an advisory and request for countries to locate a person with a view toward that person's arrest and extradition.

It would be difficult for Assange, who carries an Australian passport, to cross borders without detection.

He would most certainly face extradition to Sweden if he is arrested, McNabb said. But he would have the right to appeal it.

A U.S. warrant for Assange over the WikiLeaks postings could further complicate this case.

Toobin said he would not be surprised if there was already a sealed arrest warrant in existence.

That would mean the United States and Sweden would both be vying for Assange's extradition.

"Assange could drag this out for years," McNabb said.

Stephens, Assange's lawyer, said his client has offered to meet voluntarily with the Swedish prosecutor, and that his client is being persecuted, not prosecuted.

"There's been no communication to Julian or any of his legal team," Stephens told CNN, adding that the Swedish prosecutor has not supplied Assange with details of the allegations against him or the nature of the evidence in the case.

Assange has nothing to hide, Stephens said, and his main interest is to clear his name.

But the WikiLeaks releases of diplomatic documents have eclipsed the criminal allegations against Assange in Sweden. His pale face has been plastered in the media as the website began posting 250,000 secret cables, a process that could take months to complete.

Assange quickly became a villain to those who believe the information does more harm than good. But he remains a hero to others who believe the public has a right to know.

Many of the cables, sent by U.S. diplomats between the end of 1966 and February 2010, have contained embarrassing revelations about other countries and their leaders.

The United States has scrambled to contain the fallout and the White House has hired a counterterrorism official to oversee government-wide efforts to fix security gaps.

WikiLeaks has defended the release of the cables by saying they reveal "the contradictions between the U.S.A's public persona and what it says behind closed doors -- and shows that if citizens in a democracy want their governments to reflect their wishes, they should ask to see what's going on behind the scenes."

Wednesday, WikiLeaks began posting a new string of documents from the U.S. Embassy in Moscow, including one that blasted the Russian capital as a "kleptocracy" under now-ousted Mayor Yuri Luzhkov.

Another document described corruption as "pervasive and deep-rooted" in post-Soviet Russian society.

The cables reveal Pakistan's prime minister secretly approved of U.S. drone strikes on its soil "as long as they get the right people." In public, Pakistan has protested the use of unmanned drones.

A December 2009 cable revealed that State Department analysts raised questions about the mental health of Argentine President Cristina Fernandez de Kirchner, whether she was on medication and how she calmed down when under stress.

One document highlighted a debate within the German government about when and how to get rid of nuclear weapons on its soil. It also revealed the presence of such weapons in several European countries and Turkey -- information not normally released by NATO.

McNabb, the federal criminal lawyer, said the United States could pursue a case against Assange to silence the WikiLeaks site.

But then again, he said, all the while this latest round of secret information has been emerging on the website, Assange has been underground. What's to say Assange's arrest will stop anything, he said.

McNabb said the most important question remains: Where is Julian Assange?

CNN's Per Nyberg, Atika Shubert and Moni Basu contributed to this report.