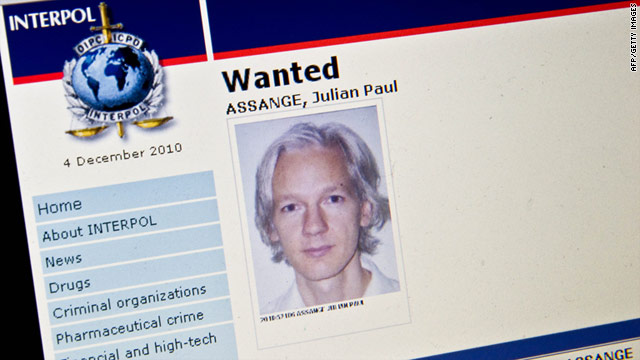 What do you think about WikiLeaks? Sound off with your opinion at CNN iReport.

London (CNN) -- WikiLeaks founder Julian Assange handed himself over to police Tuesday, promptly appeared in court where he was denied bail and left for jail in a police van.

A judge will now decide whether to extradite him to Sweden to face questioning over allegations he had sexual relations with two women without their consent. He has not been charged with a crime.

The judge at the City of Westminster Magistrate's Court ordered Assange jailed until December 14, despite several celebrities coming forward and offering to pay his surety, or bail. It was not immediately clear if the court would decide on that date whether to release him.

The judge repeatedly said the case is "not about WikiLeaks," but about serious sexual offenses that allegedly occurred on three occasions with two women.

Assange, who was in court with security guards on either side of him and his lawyer in front, initially proved reluctant to declare a home address.

At the start of the proceedings, Assange was asked for his address and at first gave a post office box. When told that wasn't sufficient, he wrote a location on a piece of paper and handed it to the judge. It was later revealed that Assange wrote "Parkville, Victoria, Australia" on the paper.

In making his decision to deny bail, the judge cited the fact that Assange gave no permanent address and has a nomadic lifestyle, and that he has access to significant funding that would make it easy for him to abscond.

Vaughn Smith of the Frontline Club, a journalists' organization that hosts many of WikiLeaks press events and gives WikiLeaks workspace in London, said he offered Assange an address for bail. Smith said he was "suspicious of the personal charges" against Assange.

The media was allowed inside the courtroom initially but was later ordered to leave.

Assange appeared in court after turning himself in at a London police station. He was arrested on a Swedish warrant.

He refused to agree to be extradited to Sweden, so the court now has roughly 21 days to decide whether to order his extradition, said Mark Ellis, executive director of the International Bar Association.

Ellis was surprised that Assange was denied bail, he said.

But Assange will now face an uphill battle to prevent being sent to Sweden -- showing that he cannot get a fair trial there.

The Swedish warrant is a European arrest warrant designed for easy transfer of suspects among European states, Ellis said.

If the court does decide to allow his extradition, Assange will be allowed to appeal that decision, too, elongating the legal process, he said.

Assange, a 39-year-old Australian, has said he has long feared retribution for his website's disclosures and has called the rape allegations against him a smear campaign.

Sweden first issued the arrest warrant for Assange in November, saying he is suspected of one count of rape, two counts of sexual molestation and one count of unlawful coercion -- or illegal use of force -- allegedly committed in August.

Swedish prosecutor Marianne Ny said in a website statement that Tuesday's actions don't represent any movement in the investigation.

"At present, the case is a matter for British authorities," she said.

Ny also said that the arrest has nothing to do with WikiLeaks.

"I want to make clear that I have not been subjected to any kind of pressure, neither political nor of any other kind," she said. "I am acting as prosecutor because there are suspicions of sex crimes committed in Sweden in August. Swedish prosecutors are completely independent in their decisions."

Assange's Swedish lawyer, Bjorn Hurtig, told CNN affiliate TV4 that his client is innocent. "Yes, I think that Julian Assange will soon be set free if all applicable laws are followed," Hurtig said. "The prosecutor wants Assange to be arrested because he didn't participate in an interrogation. But once this interrogation has taken place, there won't be any more reason to keep him, so then he should be set free."

Claus Borgstrom, the Swedish lawyer representing the two women who have accused Assange, said he is "very relieved, above all, on behalf of my clients."

"Now we are just waiting for the next step which is for him to be handed over to Sweden," he said.

The Australian High Commission in London said Tuesday it was providing consular assistance to Assange as it "would to any Australian under arrest."

A spokesman for WikiLeaks said Tuesday the legal proceedings in London had not affected the site, which facilitates the anonymous leaking of secret information.

"WikiLeaks is operating as normal, and we plan to release documents on schedule," spokesman Kristinn Hrafnsson said.

WikiLeaks has been under intense pressure from the United States and its allies since it began posting the first of more than 250,000 U.S. State Department documents November 28.

In response, the site has rallied supporters to mirror its content "in order to make it impossible to ever fully remove WikiLeaks from the internet." More than 500 sites had responded to the appeal by Monday evening, it said.

WikiLeaks has also posted a massive, closely encrypted file, identified as "insurance" -- a file Assange's lawyer has described as a "thermonuclear device." Assange has said the more than 100,000 people who have downloaded the file will receive the key to decoding it should anything happen to him or should the site be taken down.

"The insurance file will only be activated in the gravest of circumstances if WikiLeaks is no longer operational," Hrafnsson said.