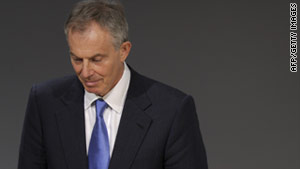 London, England (CNN) -- Former British Prime Minister Tony Blair has been called to appear a second time before an independent board investigating the invasion of Iraq, the panel announced Wednesday.

The exact date has not been announced, but seems likely to be between January 18 and February 4, the panel indicated. Blair first testified before the panel in January.

The investigation, led by a longtime British civil servant, has wide authority to investigate British involvement in the Iraq war.

Blair was prime minister in the run-up to war, during the invasion, and at the height of the conflict. He handed over power to Gordon Brown in 2007. Brown and many other current and former British officials have appeared before the panel.

Blair was mostly positive during his first appearance, but admitted that there hadn't been proper planning for what happened after the fall of Saddam Hussein.

Planners did not foresee the huge destabilizing roles played by Iran and insurgents, or problems with Iraq's civil service, he said.

"We didn't plan for two things. One was, as I say, the absence of this properly functioning civil service infrastructure," said Blair.

He noted that planners assumed Iraq would have a functioning civil service, but said a lesson to be learned is that in states operated by fear, as was the case under the Saddam Hussein regime, "that assumption is going to be wrong."

Blair also said the "single most important element of this whole business of what happened afterwards -- people did not think that al Qaeda and Iran would play the role that they did." Planners did not assume Iran, which neighbors Iraq and backed Shiite militants there, would play the "provocative" role it eventually did, he said.

He insisted that the invasion was lawful, based on U.N. Security Council Resolution 1441. Many critics of the invasion said at the time that a further resolution would be needed to authorize war.

Blair admitted that it would have been "politically" preferable to have a second resolution.

But he said Saddam Hussein was playing games with the West and more time would not have solved the problem.

He said Britain and America had slightly different reasons for going to war. The Americans, he said, wanted to remove Saddam Hussein from power. The British, on the other hand, were primarily concerned with dealing with the Iraqi dictator's "WMD ambitions. If that means regime change, so be it," Blair said.

No weapons of mass destruction, or WMD, were found after the invasion.

The Iraq Inquiry, which started last year, is headed by an independent panel led by longtime civil servant John Chilcot. Its goal is to establish what happened before and during the war and identify any lessons that can be learned from the conflict.

The inquiry is examining the period from the summer of 2001 through the present day. The military operation was launched in 2003.