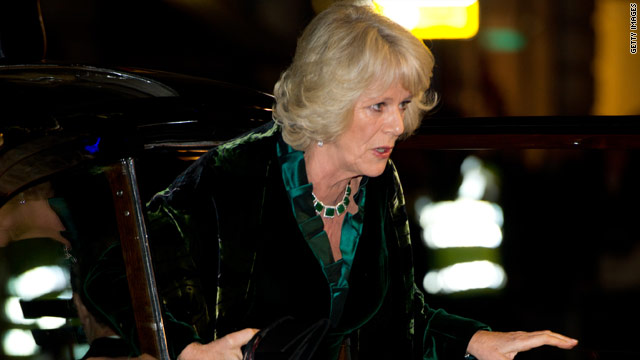 The demonstrators broke a window and tossed paint on the car, however neither royal family member was injured in the attack.

A wire photo of the royal couple, dressed in evening wear, shows startled expressions on their faces as they sit in their Rolls-Royce before exiting for a Royal Variety Performance.

The high-profile incident came late in day of violent protests that left at least 12 officers and 43 demonstrators hurt.

The vote ended hours of debate inside Parliament and an all-day protest by thousands of demonstrators outside who said the plan will price many students out of a university education. Supporters say the tuition cap hike is needed to cut the government's massive deficit.

In recent weeks, the proposal has spawned multiple public protests, set off tremors within the nation's coalition government and prompted a back-seat revolt among some Liberal Democrats in Parliament.

Liberal Democrats are lesser partners in a coalition government ruled by Conservatives.

The London protest started out peacefully Thursday, but grew more tense with the winding down of debate in the House of Commons. By late afternoon, police on horseback attempted to push back throngs of protesters moving on Parliament.

Students reacted by throwing sticks and setting off fireworks. After the vote, riot police were called out to quell disturbances in Trafalgar Square, including the setting afire of a Christmas tree. Before the fire was set, a demonstrator was seen climbing the tree.

One officer was hospitalized after falling from his horse and another suffered a serious neck injury after being knocked unconscious, the Metropolitan Police said. Four other officers required unspecified hospital treatment.

The police service announced the arrest of 26 protesters on charges ranging from arson and assaulting a police officer to drunk and disorderly conduct.

London's Metropolitan Police condemned many of the protesters.

"This has nothing to do with peaceful protest. Students are involved in wanton vandalism, including smashing windows in Oxford and Regent Streets," the department said late Thursday on its website. "Innocent Christmas shoppers are being caught up in the violence and disruption.

One final-year student, standing in front of police lines outside Parliamen on Thursday, told CNN he was there out of solidarity with students who may be priced out of a place at university. "We're all here because we're passionate about this. We feel betrayed," he said.

Prior to vote, another protester screamed, "Nick Clegg ... you're a sellout! You have betrayed us!"

The protester was referring to the British deputy prime minister and Liberal Democratic Party architect of the coalition government. The government is headed by Prime Minister David Cameron, a conservative.

Clegg supports the tuition increase plan. At least a dozen other party members, including deputy party leader Simon Hughes, said they oppose it.

Supporters say the tuition cap hike is needed to help pay down the government's massive debt. They argue the increase is not mandatory, that universities would not be bound to charge university students the full £9,000.

Under the new plan, students wouldn't have to start paying off their school loans until they begin earning at least £21,000, about $32,600, a year.

Students currently must start paying off their loans once they reach a £15,000 (roughly $23,300) threshold.