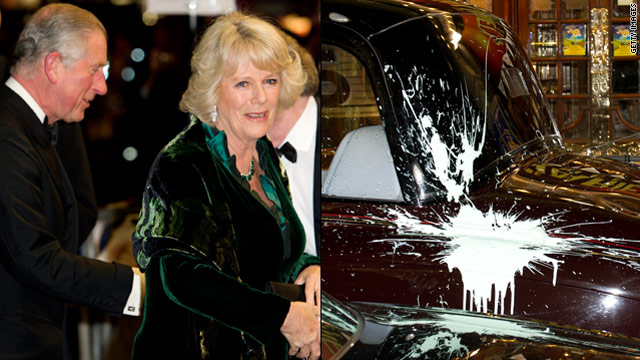 Charles and Camilla's car was hit with paint and a window was cracked as the vehicle drove through protesters.
STORY HIGHLIGHTS

May, whose responsibilities include domestic security, refused to confirm Camilla was "poked with a stick," as some British media have reported.

Charles and Camilla's car was hit with paint and a window was cracked as the vehicle drove through protesters en route to a show in central London on Thursday night. Neither of them was injured, although the duchess looked shaken as she got out of the car.

May has not offered to resign over the incident, she said Sunday on Sky News.

Police released images Sunday of 14 people they want to question in connection with violence at the demonstration, which was to protest government plans to let universities triple their tuition fees.

"We want the public to help us identify these people who may have been involved in violent disorder, attacking police officers and smashing buildings, shops and windows," Detective Chief Superintendent Matthew Horne said in a statement.

"The vast majority of the people we are seeking are suspected of committing serious offences of violent disorder and criminal damage," he said, without specifying whether any were directly involved in the attack on the royals' car.

Separately, police arrested a man Sunday for swinging on a flag at a London war memorial during the student protests.

UK protesters: 'Off with their heads'

Why are British students so angry?
RELATED TOPICS

Charlie Gilmour, the son of Pink Floyd guitarist David Gilmour, apologized Saturday for doing that, but London's Metropolitan Police declined to identify the man they arrested, other than to say he was 21 years old.

Cambridge student Gilmour said: "This is probably the worst thing I've done" on Facebook, his university's student newspaper reported Saturday. "I just wanted to swing from a flag, I didn't realise it was the Cenotaph. I feel so ashamed of myself right now."

Gilmour and his mother did not immediately reply to CNN requests for comment.

The man arrested Sunday is not one of the 14 people whose photo was released by police, they said.

The Cenotaph, outside the Foreign Office in central London, commemorates Britain's war dead, and is where Queen Elizabeth II and British officials lay flowers every November on Remembrance Sunday.

A total of 34 people were arrested at the demonstration Thursday, the fourth in a series of protests against the planned tuition increase.

British Prime Minister David Cameron said Friday that protesters who resorted to violence will "feel the full force of the law," and blamed them for wreaking havoc in London during the pre-Christmas weeks.

Addressing reporters, Cameron defended the government's contentious move to triple tuiton at UK universities and said protesters, not the police, should be blamed for the chaos.

"I immediately rang the Prince of Wales," Prince Charles, said Cameron. "We need to learn the lesson of this incident," he said.

On Friday, police sifted through rubble strewn over London's Parliament square, searching for clues and culprits in Thursday night's protests, where students and their supporters, enraged by the tuition hike, broke windows and ambushed the royal vehicle.

Members of the National Union of Students condemned any forms of violence, including from the police, they said in a statement on their website.

"Regarding many of the scenes that were witnessed yesterday, whilst it is clear that there were a small number of people involved who were inciting violence, many people were contained for a long period of time when attempting to take part in peaceful protest," the NUS stated.

"We are calling on the Metropolitan Police to have a full investigation into the clashes yesterday between protesters and the police and for it to look again at its tactics for policing demonstrations," it said.

A photo of the royal couple, dressed in evening wear, made headlines as it showed the startled expressions on their faces as they sat in their Rolls-Royce before exiting for a Royal Variety Performance.

The high-profile incident came late in a day of violent protests that left at least 12 officers and 43 demonstrators hurt.

"This has nothing to do with peaceful protest," the statement said.

"Students are involved in wanton vandalism including smashing windows in Oxford and Regent streets."

The protests followed a vote in the House of Commons to approve a plan to raise the existing cap on tuition rates charged by universities from £3,000 to £9,000 a year. In U.S. dollars, that's a nearly $10,000 a year increase -- from